Yesterday the museum hosted our final Art of Story workshop of the summer. The museum houses a wealth of narrative imagery in our collection. During these workshops, the kids explore elements shared by narrative images and the stories they inspire. Another favorite story is one inspired by Remington’s painting The Luckless Hunter. 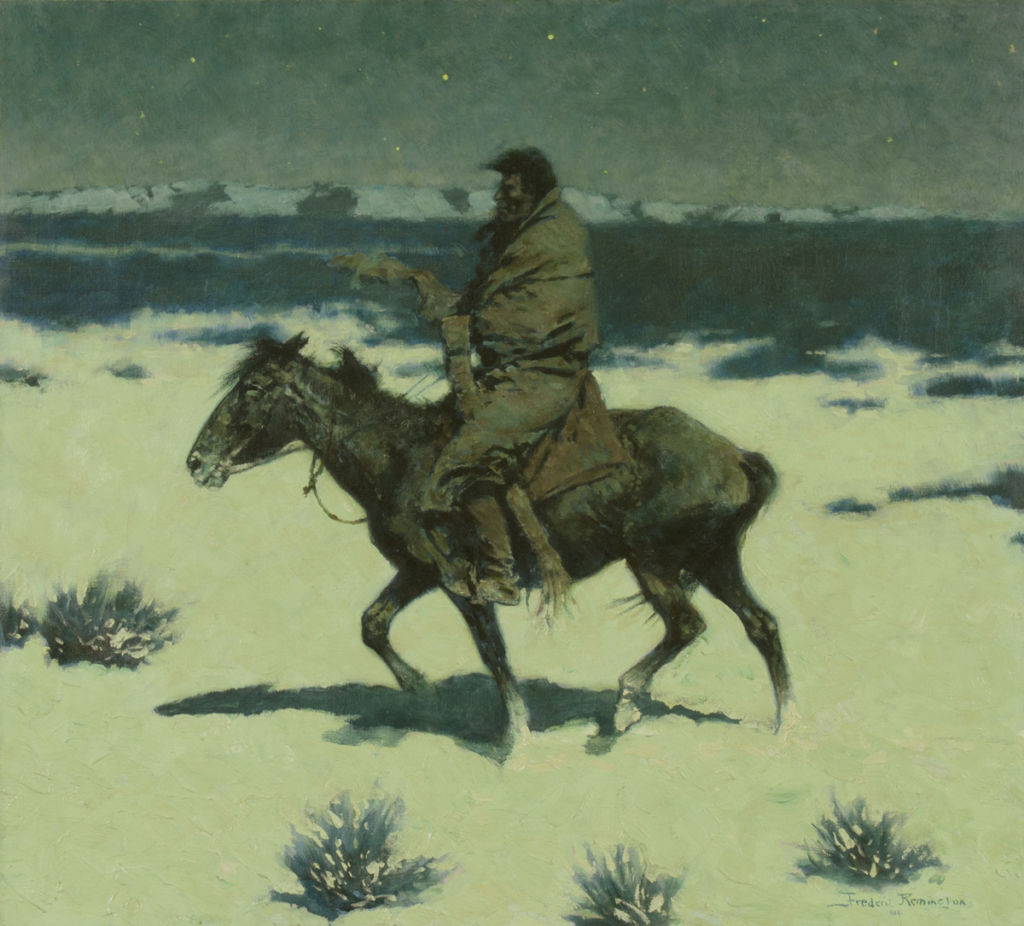 There once was a man who went out on a hunt. His family was hungry and desperate for food. He hunted alone – not the way of hunters. He made camp near the place of the tall trees. He slept fitfully and awoke in the night to the sound of wailing. A ghost appeared before him, hovering in a long, white deerskin dress; white moccasins; and with long, white hair floating around her head. The ghost groaned and wailed in the voices of the hunter’s woman and his children. Another ghost appeared, dressed as a man mourning for one who had died in disgrace. The hunter ran. He left behind his arrows, bows, and spear heads. He ran into the darkness.

As he fled, he ran headlong into another ghost. This was an older woman resembling his mother, and she was floating high in the air. She was dressed in white and cried white tears which fell down on top of him like snow. Her white hair blew around her as her form floated to the hunter. He fell to his knees, keeping his head down. The white ghost woman floated over him crying. The hunter did not move.

The night air was still, and Brother Moon was only half-way across the sky. The hunter had disobeyed the rules of his people. Ghosts were sent to kill him. The wolf lifted his jowls and grabbed the hunter’s belt with his sharp, white teeth. The wolf growled, tugging on the belt, and the hunter stood and followed. The wolf let out a yelp. The hunter followed the wolf to another camp.

There were hunters from another tribe, and they needed another hunter. The wolf pulled the hunter to the ground and moved into the clearing near the others. As the wolf walked to the fire, his shape turned into that of a man. The man spoke with the others. They listened and nodded, smiling. The man turned and beckoned the hunter to enter the clearing and meet the others, which he did. As the hunters talked, the strange man stepped back into the forest. He returned to the shape of a wolf.

The wolf lifted his head and howled, disappearing in the night. The hunter was adopted into this group and was treated well. He became the best hunter of them all, and he never hunted alone. Whenever he returned from the hunt, he would leave meat outside the camp. In the morning the meat was gone, and there were only the paw prints of one lone wolf.

From White Wolf Woman and Other Native American Transformation Myths by Teresa Pijoan.