Our current exhibit, Night & Day: Frederic Remington’s Final Decade, follows the progression of color and nuance of brushstroke and surface texture in Remington’s late painting style. The 21 works included cover each year Remington was working in his final ten years. Starting from 1901 as represented by The Old Stage-Coach of the Plains from the Amon Carter Museum of American Art, with slate gray and aqua blue to much greener color of night Remington gets to by 1906 as represented by A Taint on the Wind from our collection. The show ends in 1909 as Remington becomes more experimental with texture and color as seen in paintings like our Buffalo Runners – Big Horn Basin. 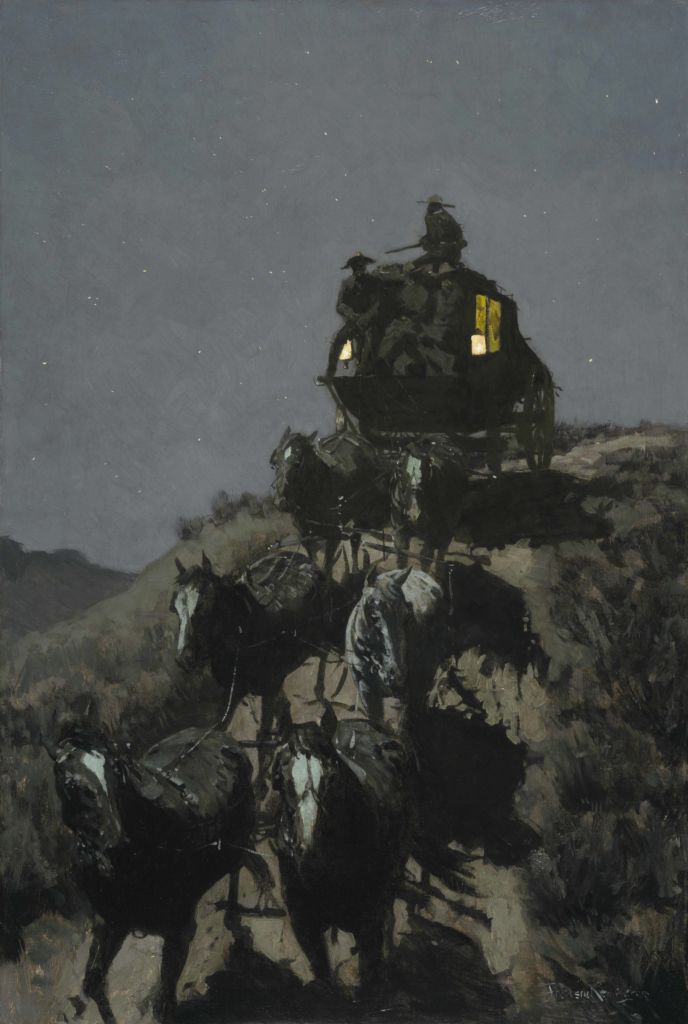 Frederic Remington, The Old Stage-Coach of the Plains, 1901, oil on canvas, Amon Carter Museum of American Art, Fort Worth, 1961.232 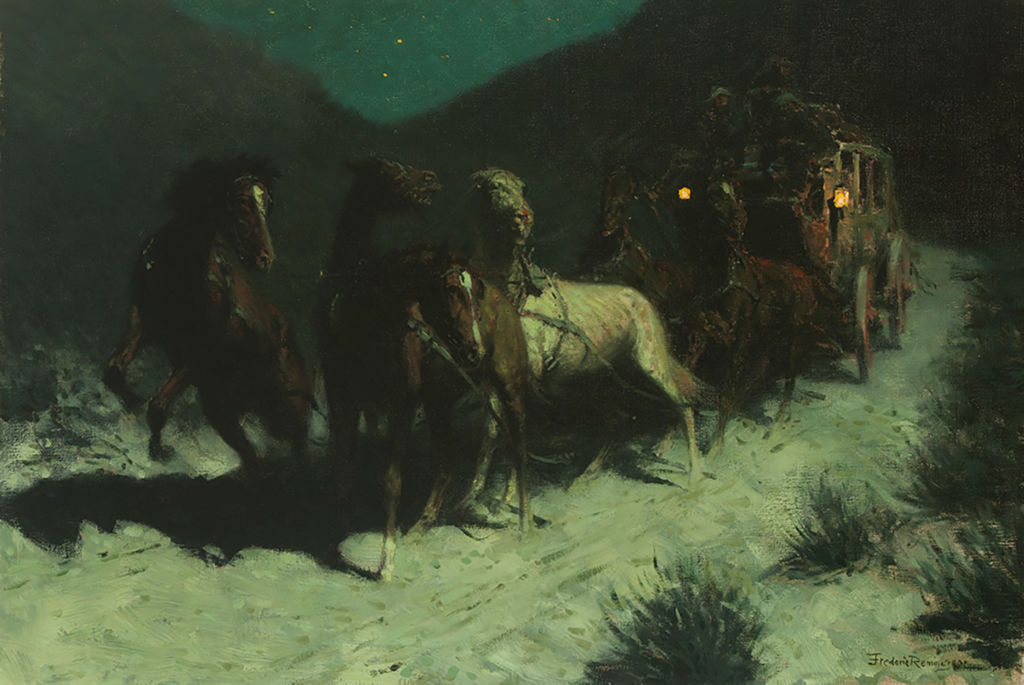 Frederic Remington, A Taint On the Wind, 1906, oil on canvas

When you look closely at the details of Old Stage Coach, you’ll notice a gray layer peeking through on the grooves of the canvas. That is the ground of the canvas. There is very little paint being applied to its surface. 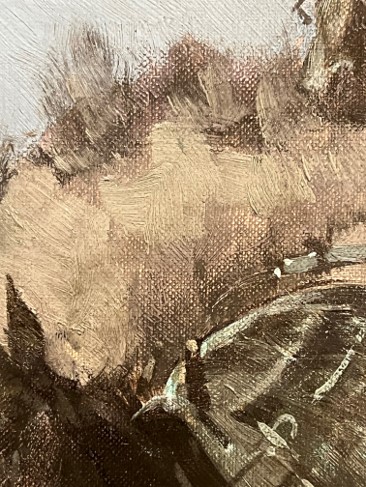 Details of The Old Stage-Coach of the Plains, 1901, Oil on canvas, Amon Carter Museum of American Art 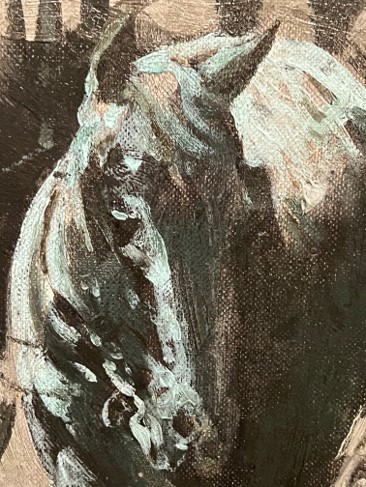 Details of The Old Stage-Coach of the Plains, 1901, Oil on canvas, Amon Carter Museum of American Art

By 1903, as seen in paintings like The Parley from the Museum of Fine Arts, Houston, Remington is starting to build paint texture, which you can notice in the foreground of the composition. 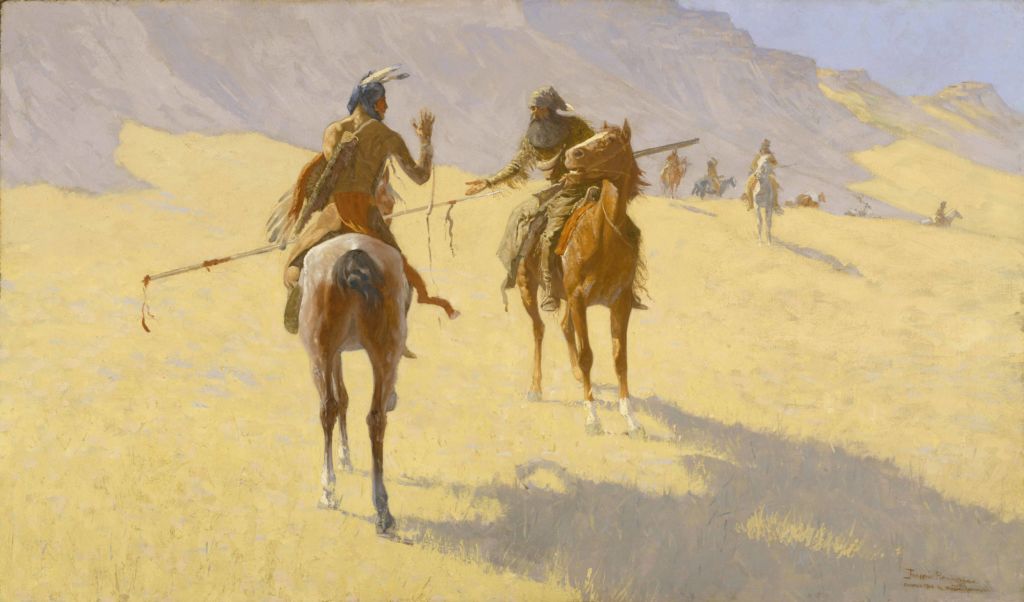 You can see that build up of paint especially when Remington is working on subjects with snow, like his 1905 The Belated Traveler, wherein you see the crossing brushwork and hatch marks across the canvas. Remember that slate gray tone in the sky of The Old Stage Coach? Look at the sky in The Belated Traveler and you’ll see that same slate gray as the under color with an addition of a Veridian green mixture scraped over top. 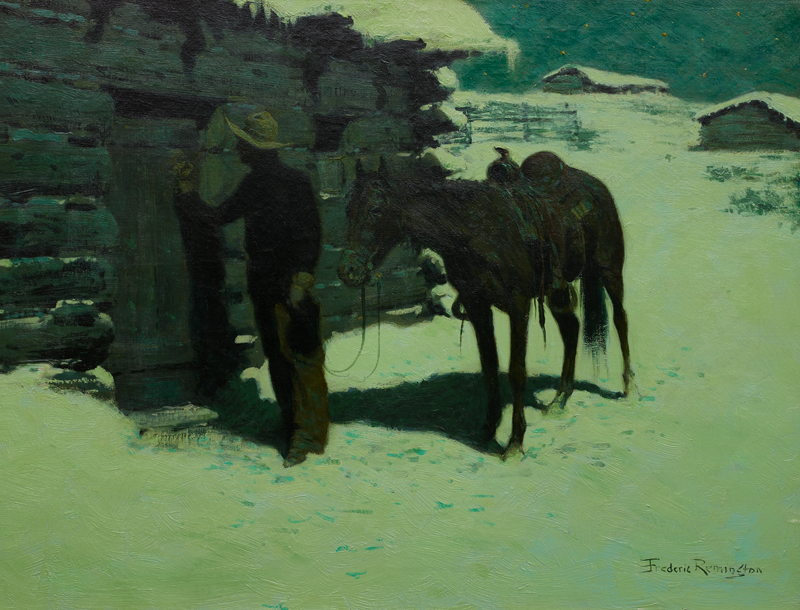 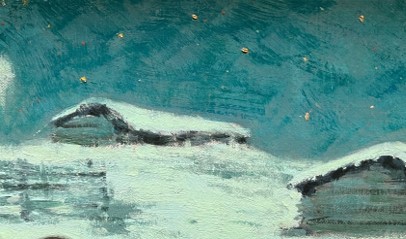 The Desert Prospector from 1907 (private collection) creates mystery and mood through subtle, nuanced painting. Conservator shone a light behind the picture. What you see are areas of thin paint that let light through. Now we have proof about how thin he’s painting. 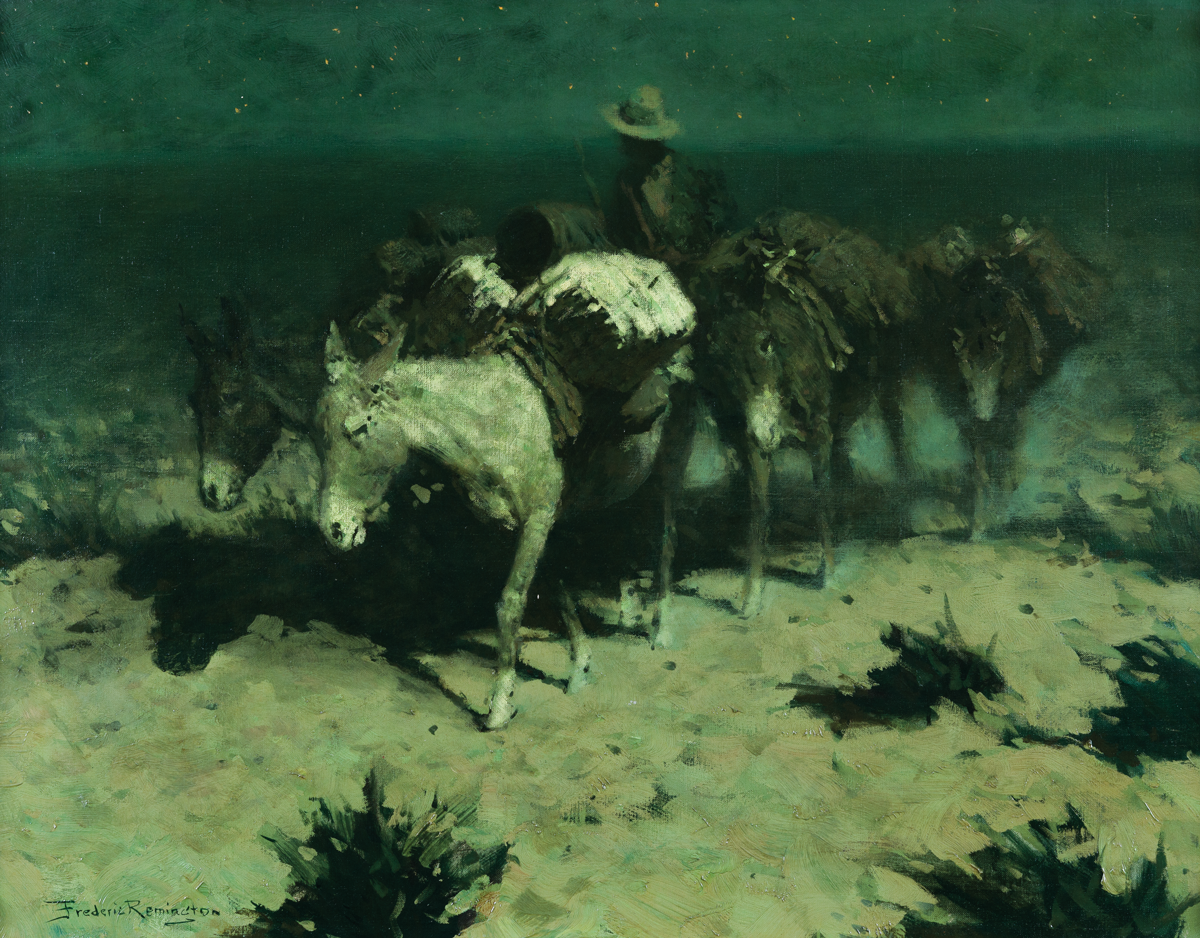 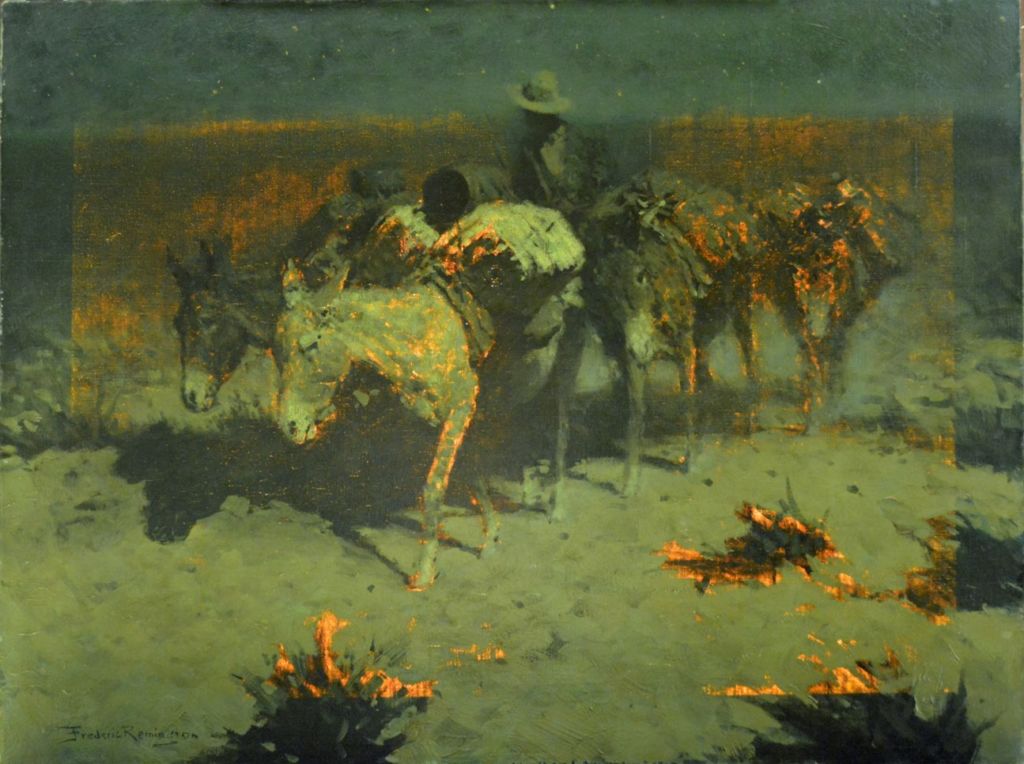 On the other end of the spectrum is Remington’s use of impasto that create these glistening effects on the surface of the canvas. Impasto is a thick build up of paint, which increases the perception of the paint by increasing its light-reflecting textural properties. Remington plays with that effect by strategically placing areas of impasto on his compositions as seen in his 1889 The Sentinel wherein you see the build up of paint on the figure’s shoulder and arm.  You can see how Remington continues to use impasto in later works like A Taint on the Wind where he builds up paint on the lanterns of stagecoach. Or the foreground of his 1907 The Dry Camp. 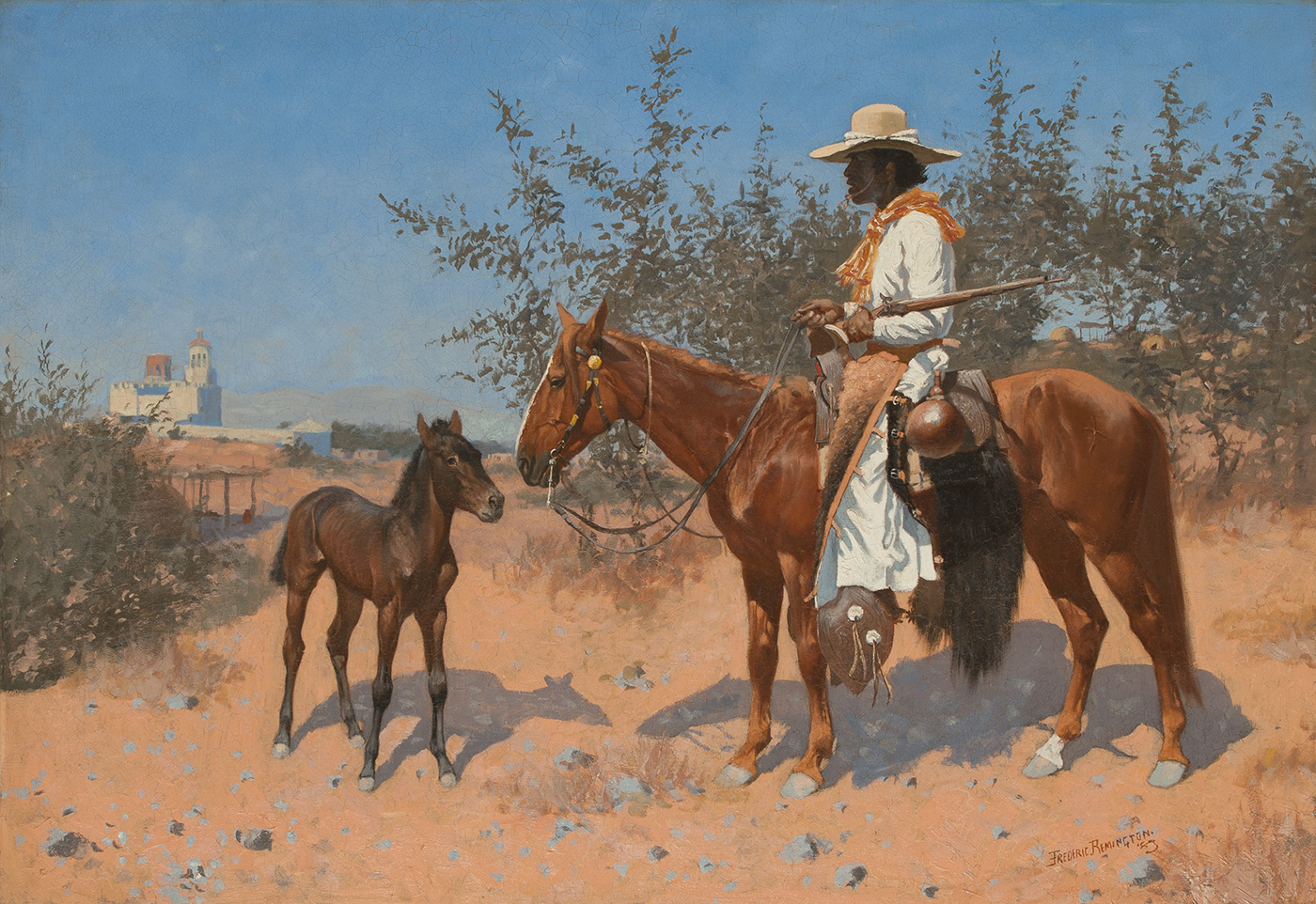 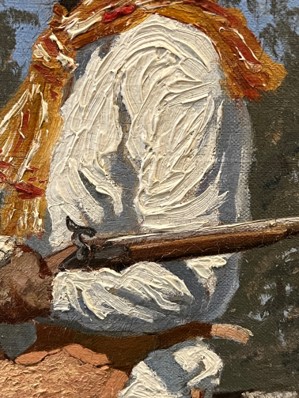 The Sentinel, detail of impasto 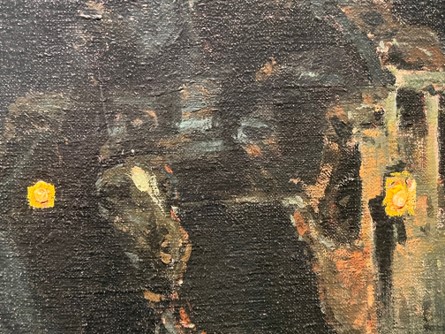 Taint on the Wind, detail of impasto 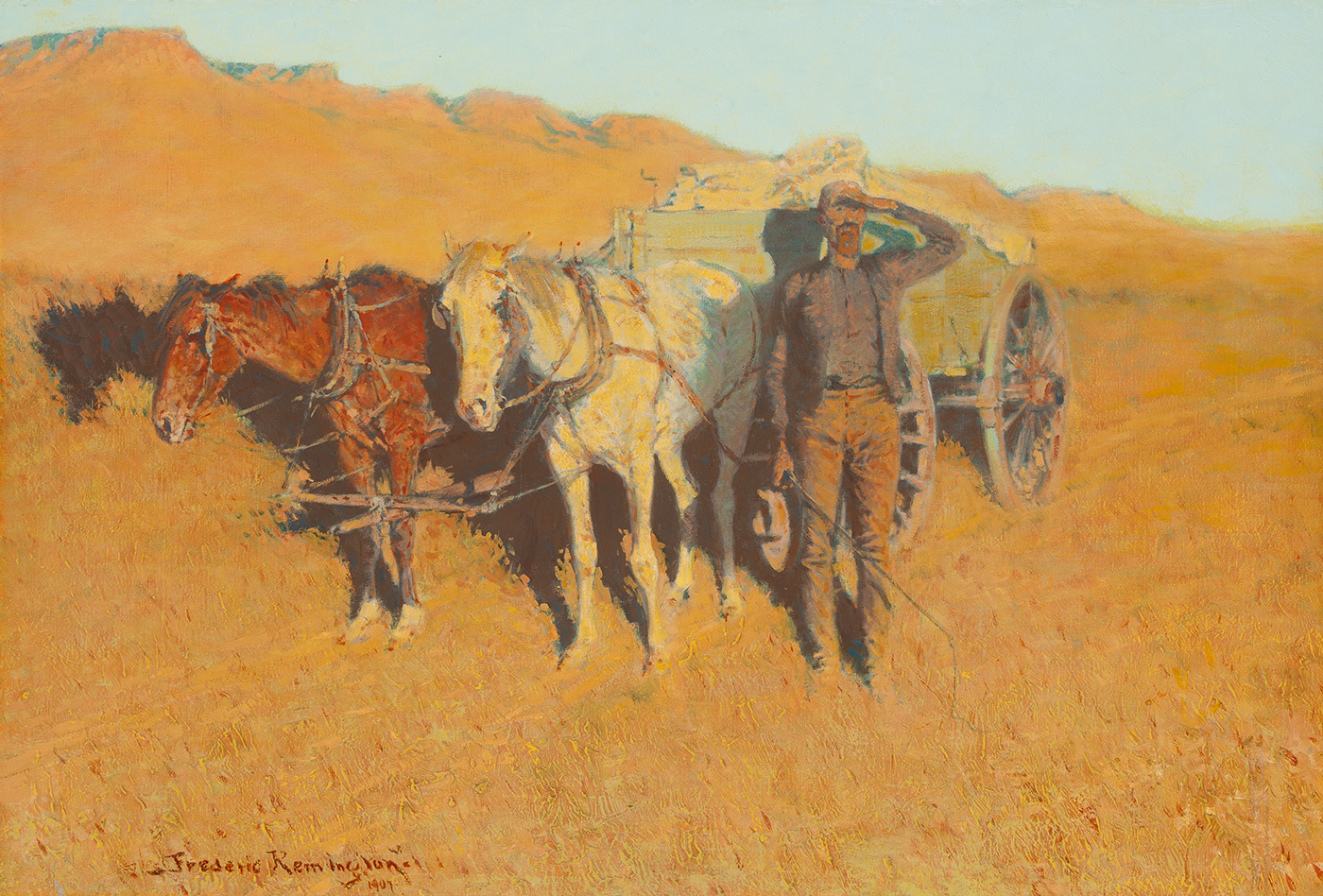 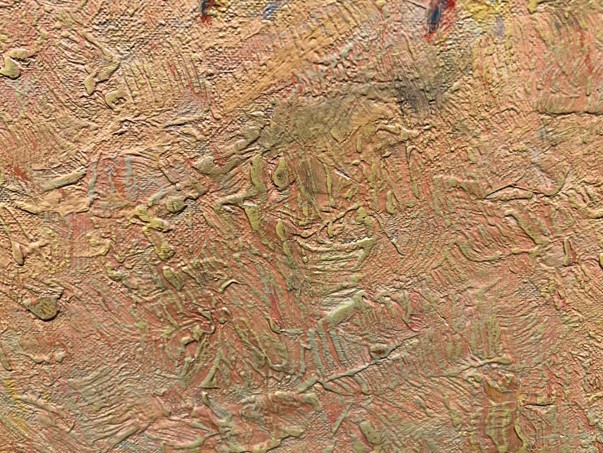 The Dry Camp, detail of impasto

Remington’s final decade of his career is rife with experimentation and changes not only in style, but also evolutions in his paint texture, brushwork, and color palette. Our director, Scott Winterrowd, who curated our current exhibit, more deeply explored this transformation in his recent public lecture program, Painting from Thin to Thick: Remington’s Impressionist West. To view the full recording, click here. 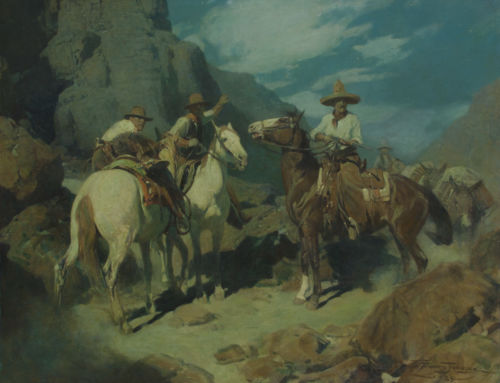