Madonnas of the Prairie

Madonnas of the Prairie

Upon special occasions, the Sid Richardson loans works from the collection to other institutions. This spring, Charlie Russell’s Three Generations is taking a road trip up to Canyon, Texas to be included in the Panhandle-Plains Historical Museum’s exhibition – Madonnas of the Prairie: Depictions of Women in the American West. 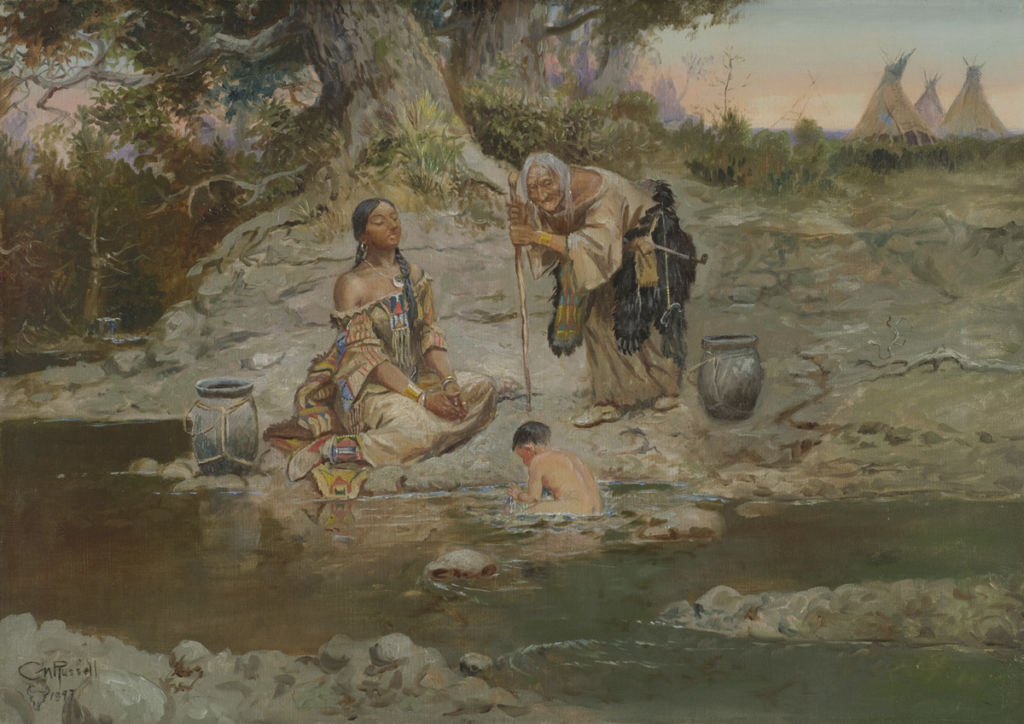 Organized by Michael Grauer, Associate Director for Curatorial Affairs & Curator of Art and Western Heritage, the exhibition highlights the representation of women in the American West. Grauer notes:

In the mid-nineteenth century many artists depicted women as victims, passive observers, or merely passengers in the settlement of the American West. Some artists chose to portray Western women in the guise of a “Madonna” figure, based on Renaissance and Pre-Raphaelite paintings of the Virgin Mary. Conversely, Western artists such as Russell portrayed American Indian women more honestly, revealing the harshness of their lives of unceasing toil. Others described women in the West as beautiful objects to be admired, with no true role to play except to stand in the doorway or by the corral gate watching their men ride away. Wild West shows in the 1880s turned this view on its ear by including women trick riders and shootists and promoted these women using painted posters.

By the turn of the 20th century, and especially due to the groundswell of Western fiction, women began to be depicted in much more active roles: plowing fields, picking cotton, riding bucking horses, herding cattle, holding outlaws at bay, and even dragging the wounded to safety under fire, all while also taking care of the children and home.  Simultaneously, advertisers and commercial artists invented the “cow-boy girl,” a stereotypical depiction of a “rough and ready” outdoorsy female—replete with sidearm—to sell male-oriented products, ammunition, tobacco products, and coffee, for example. The “cow-boy girl” eventually evolved into Western pin-up girls during the 1950s, when television Westerns dominated the small screen. During the ‘teens, women competed in all rodeo events and were usually the stars of early rodeo through the 1920s. In the 1920s the cult of the “Pioneer Mother” resulted in an international competition for a heroic bronze installed at Ponca City, Oklahoma. During the Depression and the subsequent “official” New Deal-inspired/encouraged Regionalism, Western artists—including painters, sculptors, and photographers–depicted the nobility and steadfastness of farm women in particular.

Russell’s Three Generations will be installed in a section devoted to the severity of Western life along with paintings by Ivan Albright—whose “obsessively detailed painting style put on canvas the crushing impact of drudgery and advancing age”–and W. H. D. Koerner, where concerns with maintaining fashionable dress and soft skin were abandoned by necessity.

To prepare the painting for the long journey, it must be carefully packaged and crated, which requires a detail-orientated team. Displays Fine Art measured and adjusted the crate’s padding to perfectly fit the dimensions of the painting. After wrapping the painting in a protective layer and ensuring the security of the painting’s position, they bolted the crate and loaded it into the van. 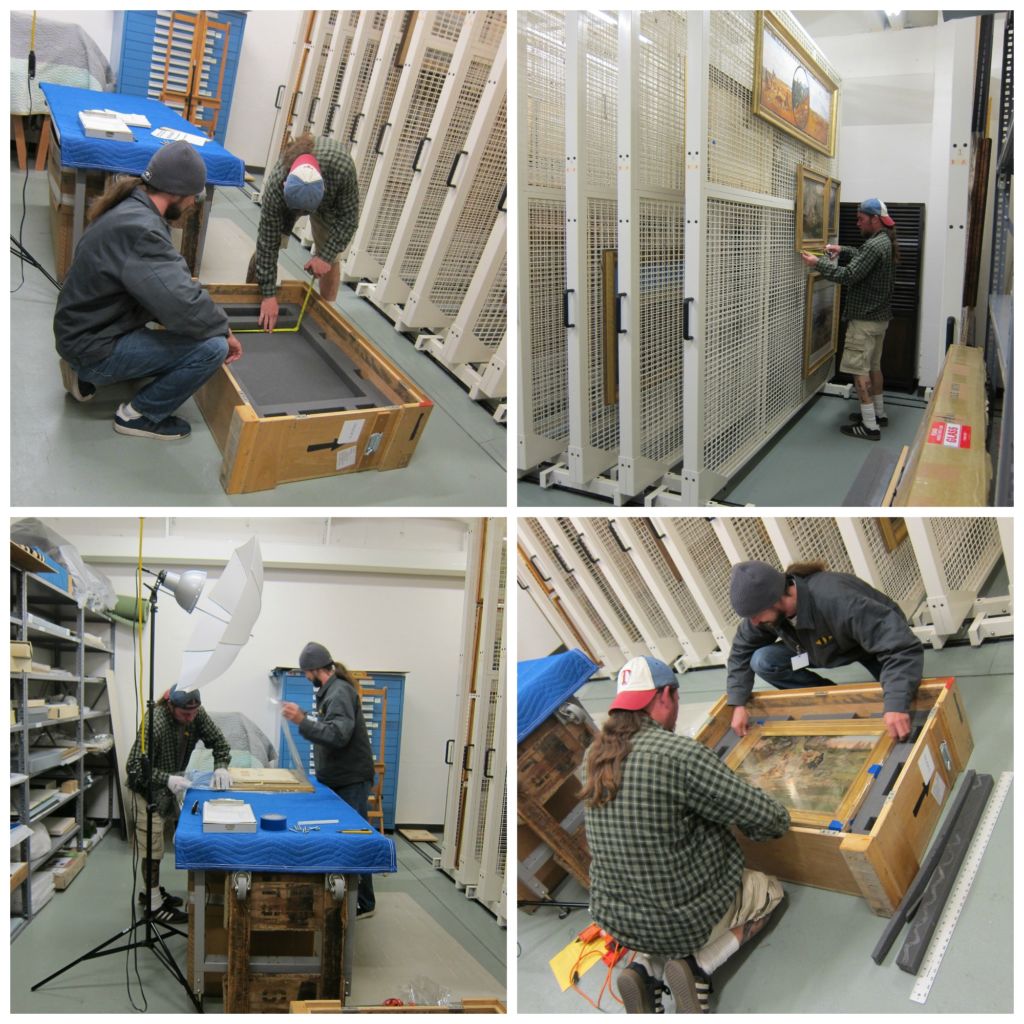 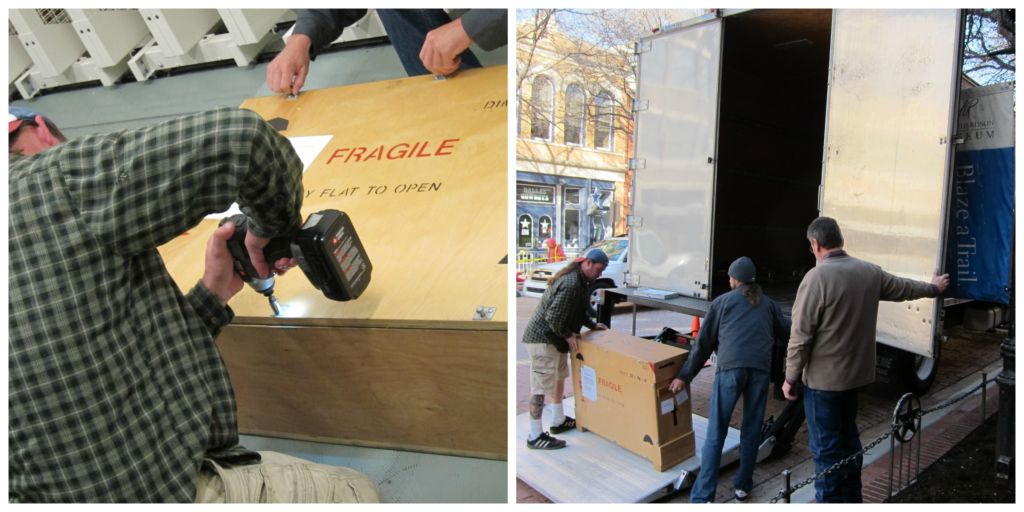 Madonnas of the Prairie will be on display at PPHM from April 12 through August 30, 2014. Not able to make a road trip up to Canyon? The Sid Richardson’s current exhibition, Western Treasures, includes representations of women of the West. In Russell’s Seeking New Hunting Grounds and Bringing Up the Trail , the artist celebrates the role of women in Native American cultures, as discussed previously on the blog. 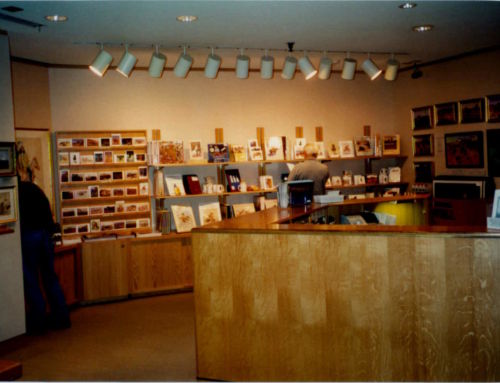 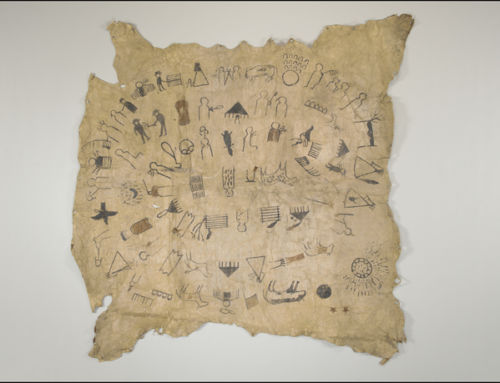 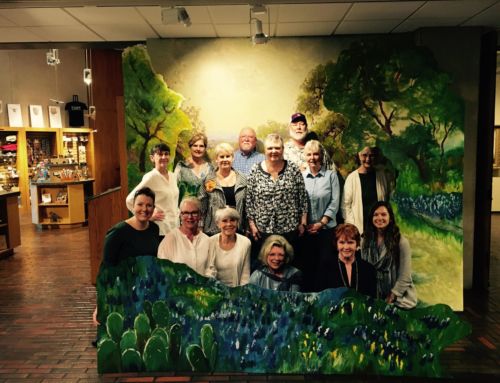