Keep Calm and Trail Drive On

Keep Calm and Trail Drive On

*After the Civil War, there was a need to connect the ranchmen of Texas Longhorn cattle with the feeders and packers in northern U.S. By the 1870’s, Texas began to assume its preeminence as a source of American food, particularly beef. As such, moving cattle from grazing lands in Texas to rail terminals was an annual job.

The new Kansas Pacific railroad brought an opportunity to set up new markets for Texas cattle in northern states. Promotional maps and pamphlets were printed in large numbers between 1871 and 1875 praising the benefits of using the railroad’s services to fill the government’s demand for cattle. These “promotionals” were used to advertise the Kansas Pacific Railway, enticing drovers from the shipping centers of rival railroads, but also to promote certain towns over others.

Our current exhibit, Hide & Horn on the Chisholm Trail, features a map, guide, and book that would have been used by cowboys and cattle businessmen during the late 19th century. 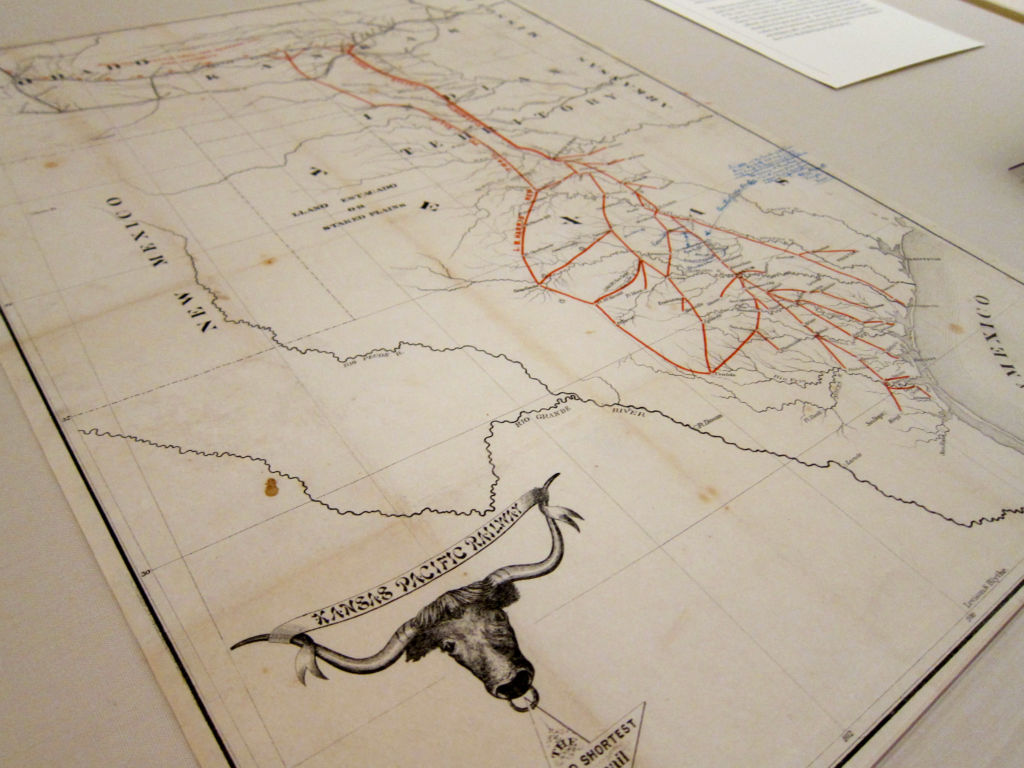 On prominent display in our galleries, the map shows various cattle routes from points in Texas to Camp Concho where the L.B. Harris Trail begins and to Red River Station, which is shown as the beginning of the Ellsworth Trail.

The map was the brainchild of Englishman William Weston (1844-1920), a mining engineer who was in the area at the time railheads were competing for the cattle trade.

Maps like this one and their subsequent printed guides were distributed complimentary in Texas by the Kansas Pacific railroad’s agents and others.

This particular map showcases the town of Ellsworth, Kansas, depicting its railhead as the most convenient by providing easy access to markets both east and west.

Red arrows along the top show the direction of the Kansas Pacific and the towns in Kansas that were railheads. These towns included Ellsworth, Russell, Fort Hays, and Ellis. 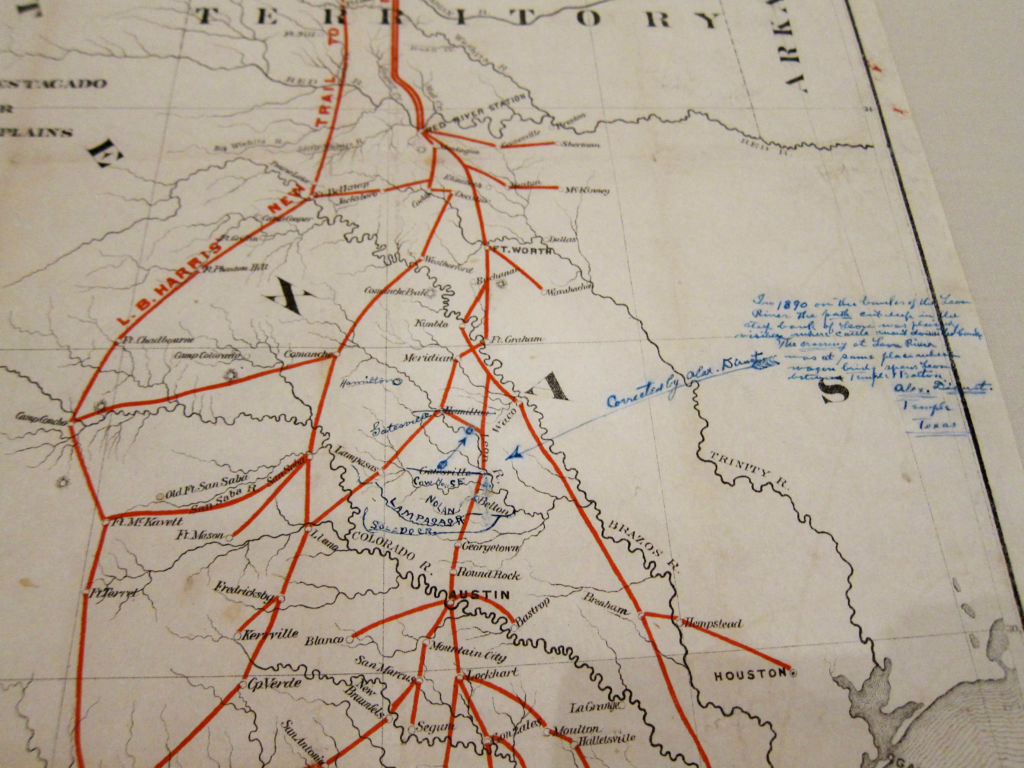 Viewers visiting our exhibit will see that the map on display has a few corrections and notes in blue ink, which were done by Texas historian-antiquarian Alexander Dienst, Jr., commenting on the crossing at the Leon River.

In 1890 on the banks of the Leon River. The path cut deep in the steep bank of Leon was plainly visible where cattle went down the bank. The crossing at Leon River was at same place where wagon bridge spans Leon between Temple and Belton.

Dienst moved the town of Hamilton to the northwest and then moved Gatesville to where Hamilton had been placed.

When not in use, the map was folded into a stitched paper wrapper and inserted into the guide book. 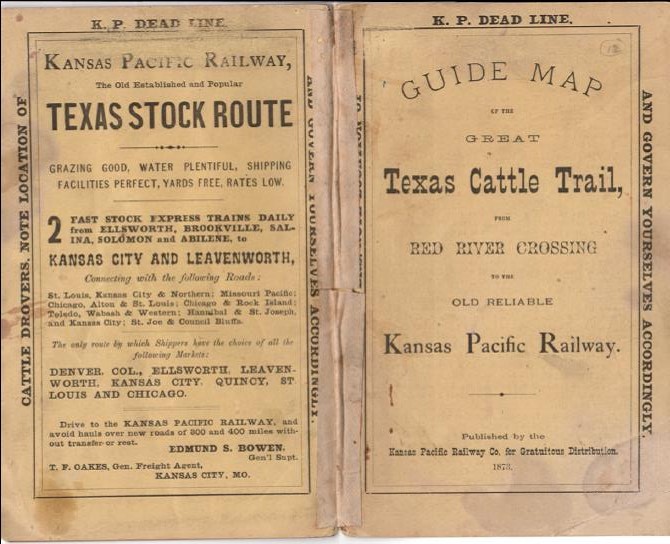 The guide book includes a narrative and guide table. The narrative details the route and the conveniences it offers for drovers:

The abundance of grass and water; absence of ticks and mosquitoes, and the abolishment of taxes heretofore exacted by the different tribes of Indians, are facts too well known to incorporate in this article. 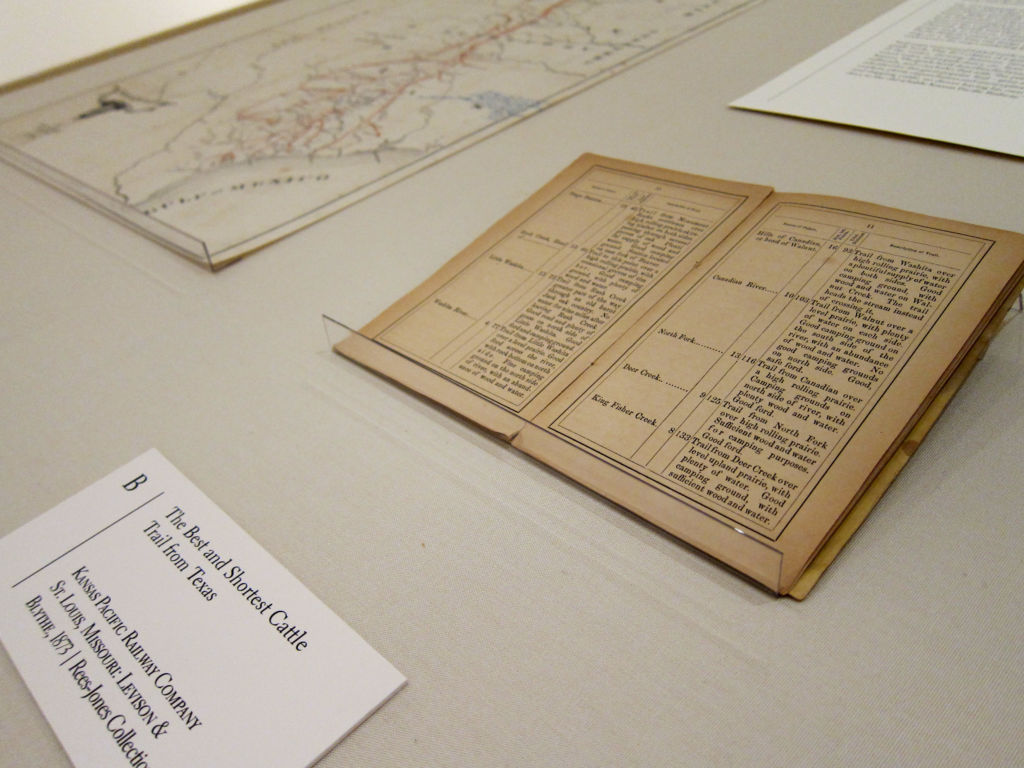 The narrative is followed by a guide table, which includes valuable information such as the distance between each stop, details about streams and crossings, camping grounds, good sources of water, wood, supply stores, etc. Pretty handy on a cattle drive, right?

This compendium on Texas cattle and cattlemen is one of the rarest of Texas books. It is over 700 pages long. The first half of the volume provides some of the best accounts of the history of the Texas cattle trade.  The second half has nearly 400 pages devoted to biographies of 449 Texas cattlemen.

In addition to featuring cattlemen, the biographical section is also a great source of biographies about women in the cattle country of Texas. Many of the women were married to ranchers and participated in the business. However, some women had to forge their own way without a husband. 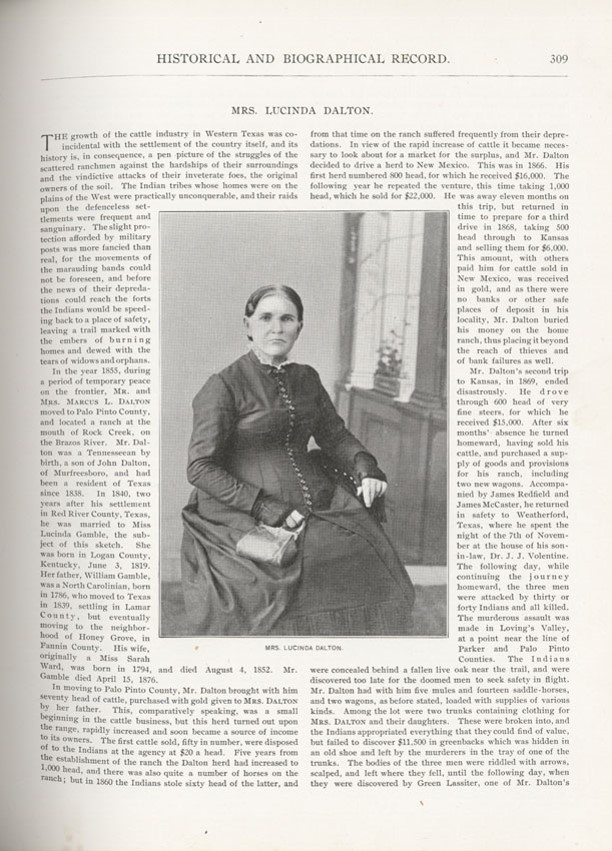 As part of our Hide & Horn exhibition, these objects provide a tangible representation of an ephemeral period in Texas history, a time of “The Cowboy, As He Was, And Is, And Is Supposed to Have Been.”