On a starry night, a stagecoach pulled by six horses travels on a moonlit path through a mountainous range when the horses get spooked. What has terrified the horses? The artist, Frederic Remington, does not tell us, but instead implies that there is something beyond the painting’s frame. The title, A Taint on the Wind, suggests that the horses smell traces of a foul odor in the breeze, causing them to pull of the reins. 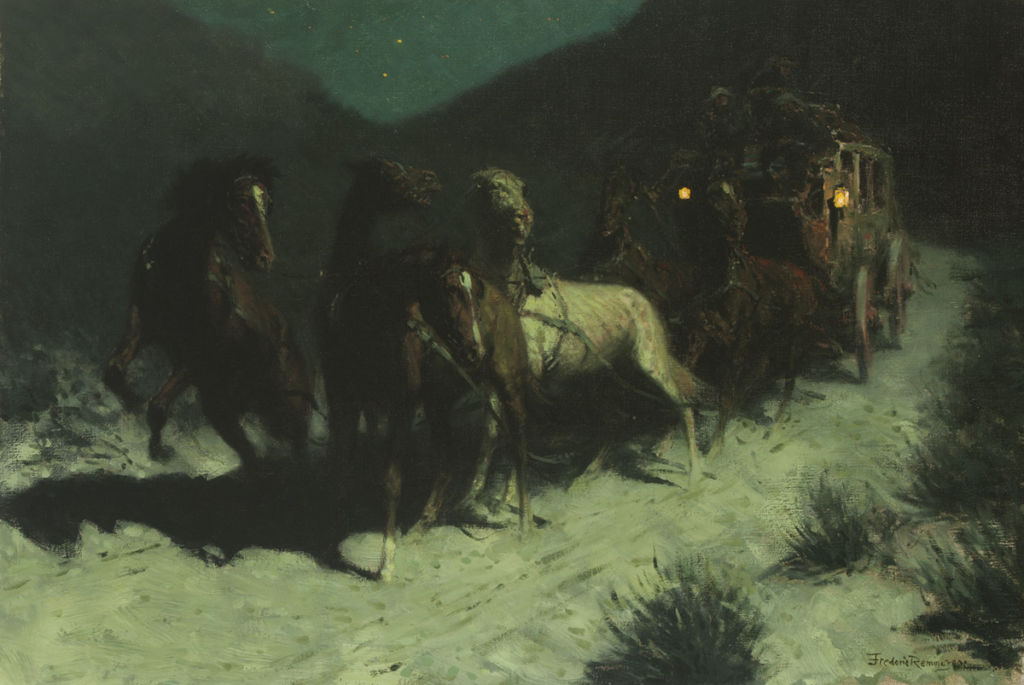 While stagecoach travel was a popular mode of transportation in the 19th century, stagecoaches did not frequently pass each other as do cars on a highway today. Before cars and planes were part of our everyday life, a trip on a stagecoach was an adventurous and challenging way to travel – at an average rate of only 5 miles per hour. Between 1852 and 1918, organizations such as the Wells Fargo & Company specialized in hauling mail, money and other valuables across the expansive Western terrain. Government legislation established stagecoach routes, including the Butterfield Line, which traversed south through Texas, from Sherman to El Paso, stopping about every 30 miles to refresh the horses. Stagecoaches, like the one pictured in A Taint on the Wind, first arrived in Fort Worth in 1856. 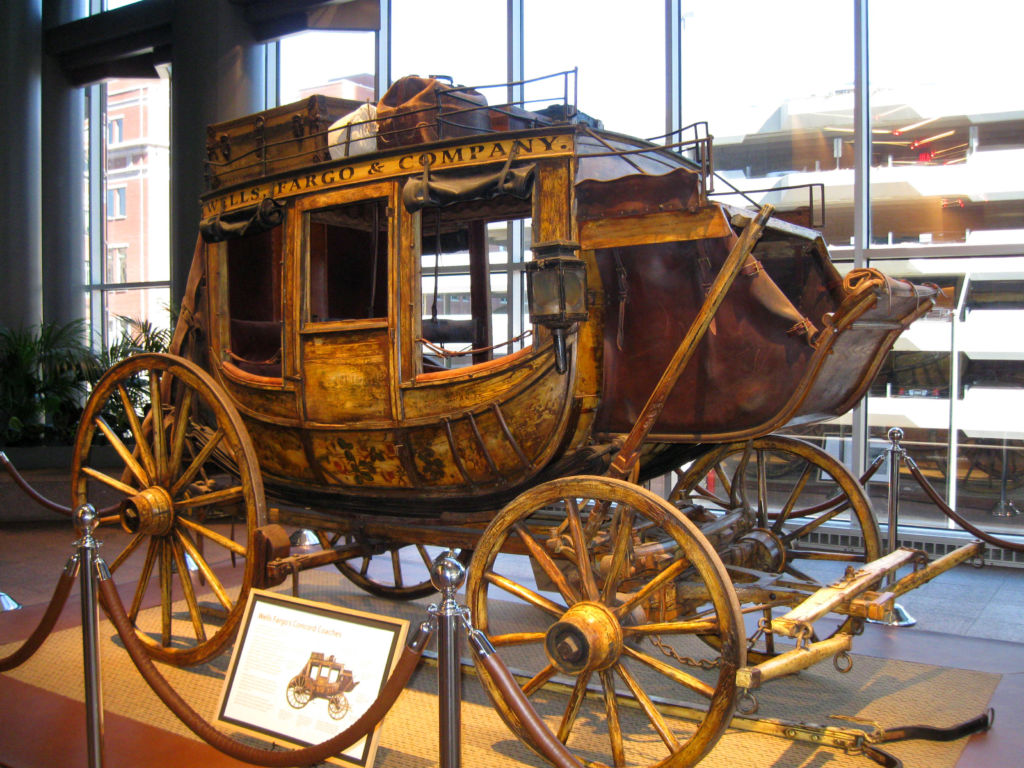 An original Wells Fargo stagecoach from the 1860s is on public display in the Wells Fargo Tower lobby in downtown Fort Worth.

As a reflection of an earlier era, Remington completed A Taint on the Wind in 1906, when the world of stagecoach travel was actually in decline. In fact, as early as May 10, 1869, the east and west coasts were united by the transcontinental railroad in Promontory Point, Utah. By the turn of the century, a limited number of automobiles were produced, marking the beginning of the end of the horse-drawn coaches.

A Taint on the Wind exemplifies the artist’s nocturnes, a series of paintings completed during his later years that depicted night scenes. Notice the predominant green colors. Remington was influenced by the American Tonalists, artists who explored the range of possibility in a single color. In 1899, Remington viewed an influential exhibition featuring the work of Charles Rollo Peters, a tonalist painter who specialized in nocturnes. New developments in the paint colors of transparent green and lead zinc white enabled Remington to successfully render colors of the night. 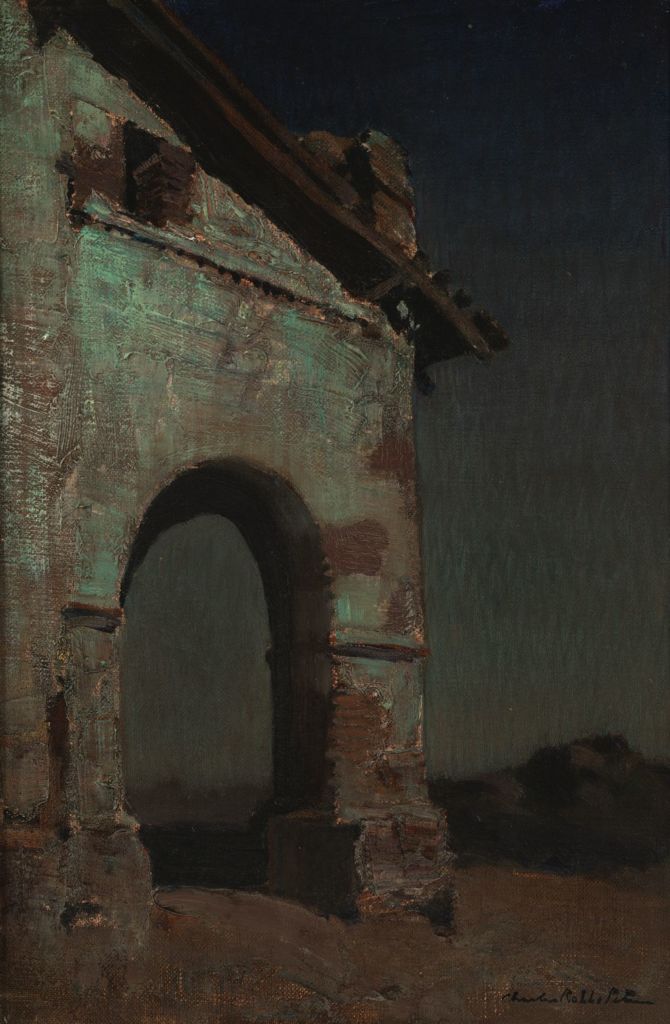 Remington had success with an earlier version of a coach at night in the Amon Carter’s The Old Stage Coach of the Plains, 1901. When placed together, the two paintings provide a comparative study of the artist’s development as a painter. Remington once said that a canvas “should glow and quiver” with light. To represent light sources in his composition, Remington contrasts the colors of the night sky with dots of yellow to indicate twinkling stars. Likewise, two heavily applied daubs of yellow paint indicate lanterns swinging off the stagecoach. 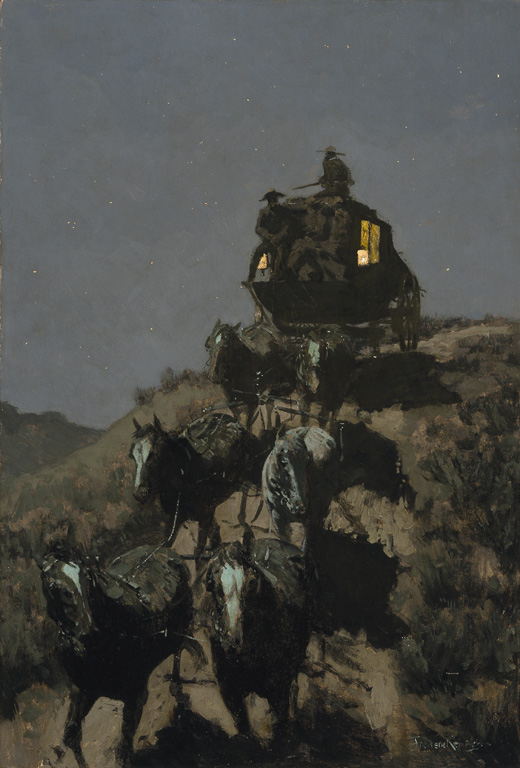 Included in a 1906 one-man exhibition, the second of Remington’s career, A Taint on the Wind was well-received, with acclamation from noted figures like the American Impressionist Childe Hassam. After having attended Remington’s show, Hassam wrote to the artist, “I think they are all the best things that I’ve seen of yours – for sure! You are sure to have lots of success with them too – Nobody else can do them.” Hassam admits, “I don’t remember titles, but I was interested in the coach coming down the hill.” The painting sustained its popularity when included in an exhibition two years later at the Union League Club. Remington saw it there and recorded the visit in his diary, “Lunched at Players and…[went] to Union League show of picture[s] where found my Stage Coach in place of honor and with all the crowd in front of it. It is a dandy.”