*The following is part of a new series of blog posts researched and written by Dr. Mark Thistlethwaite, Kay and Velma Kimbell Chair of Art History TCU School of Art, and guest curator of SRM’s special exhibit Another Frontier: Frederic Remington’s East. 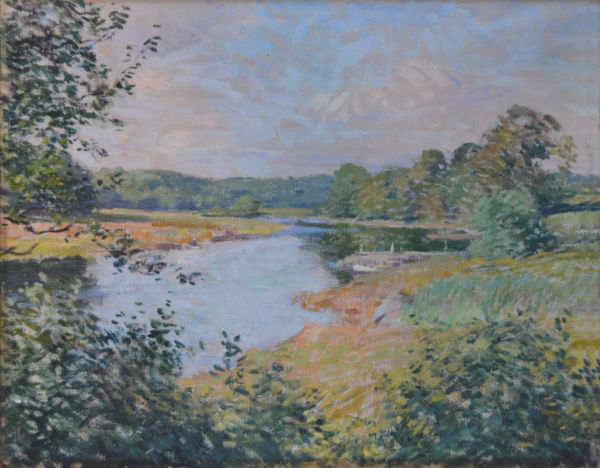 When you visit the special exhibition Another Frontier: Frederic Remington’s East be sure to check out the photographs, letters, and drawings displayed in the vitrines in the center of the gallery. One particularly intriguing object to see is a portrait of the renowned American landscape painter Willard L. Metcalf, which inhabits a page from Frederic Remington’s People I Know, an album of caricatures drawn by the artist and his friends. To counter the sullen visage that he had been given, Metcalf wrote good-naturedly: “This is what they do to an unsuspecting visitor—Take warning!!” If you look closely at the page, you’ll notice that the caricature is signed by Gus Thomas (who contributed several other sketches to this album). Who was he? 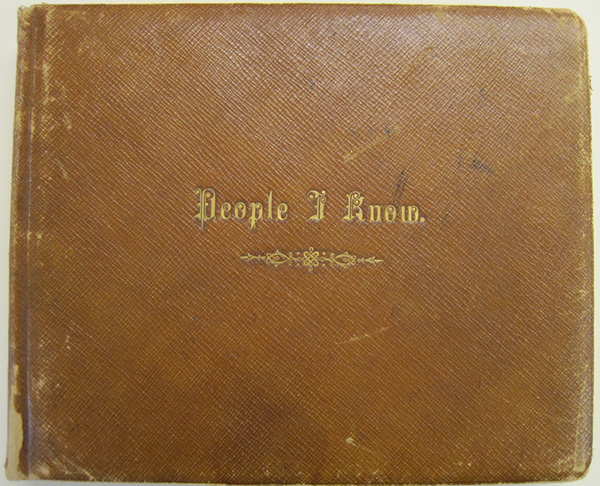 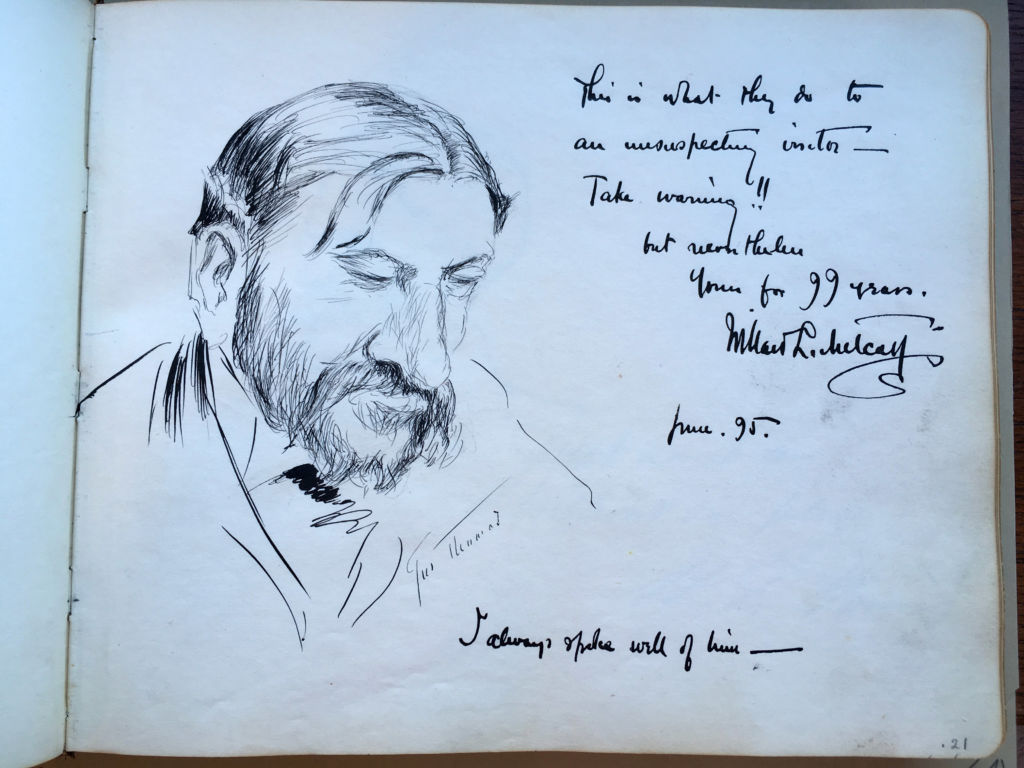 Augustus (Gus) Thomas (1857-1934) was Remington’s very good friend and neighbor in New Rochelle, New York. He was also one of the leading American playwrights of the day. Born in St. Louis, Thomas secured a position as a “page boy” for the 41st United States Congress (1870-71), where his talent for caricature caught the attention of his Congressional sponsor, who encouraged him to render images of members of the House of Representatives. Later, after returning to his hometown, Thomas turned his skills to editorial cartooning for local newspapers. However, a longstanding interest in the theater convinced him to begin writing plays in 1884. His career would flourish and he would write more than sixty plays. 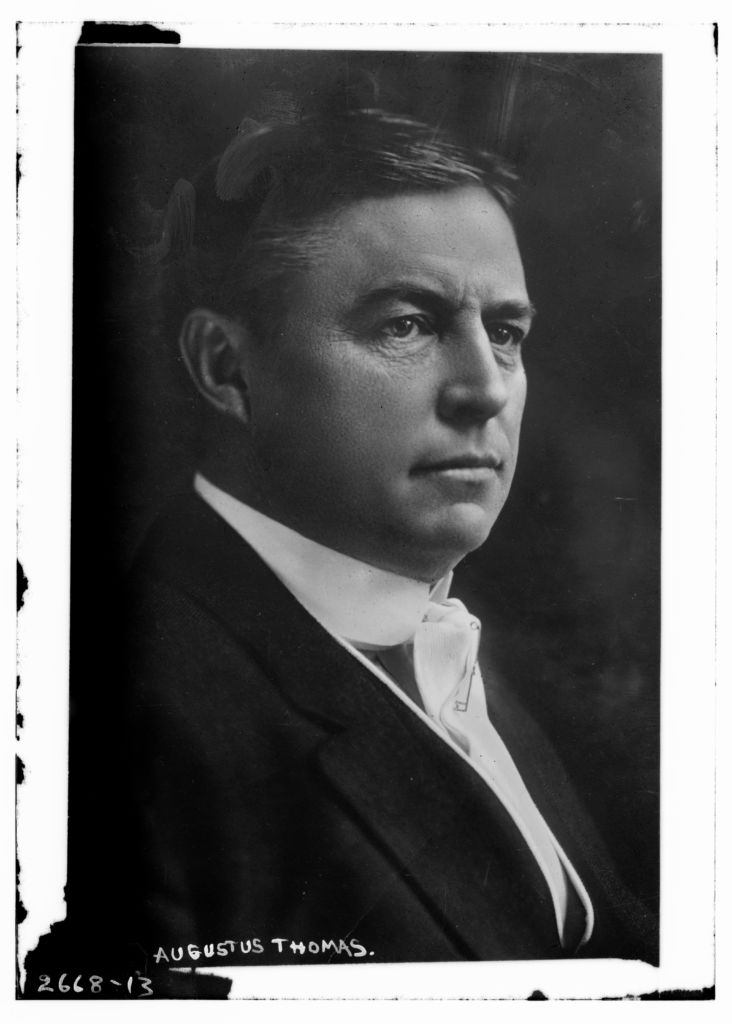 The play that secured his reputation (and wealth) was Arizona, which was a theatrical blockbuster when it opened on Broadway in 1900. The impetus for the play was Frederic Remington—who had enthusiastically encouraged Thomas, then experiencing “writer’s block,” to head west in 1897 to rejuvenate himself. Remington obtained for “Tommy” (as he called him) a letter from the U.S. Army’s Western major-general directing all commandants to provide him with information and assistance. August Thomas declared his trek to Arizona to be a turning point in his career. 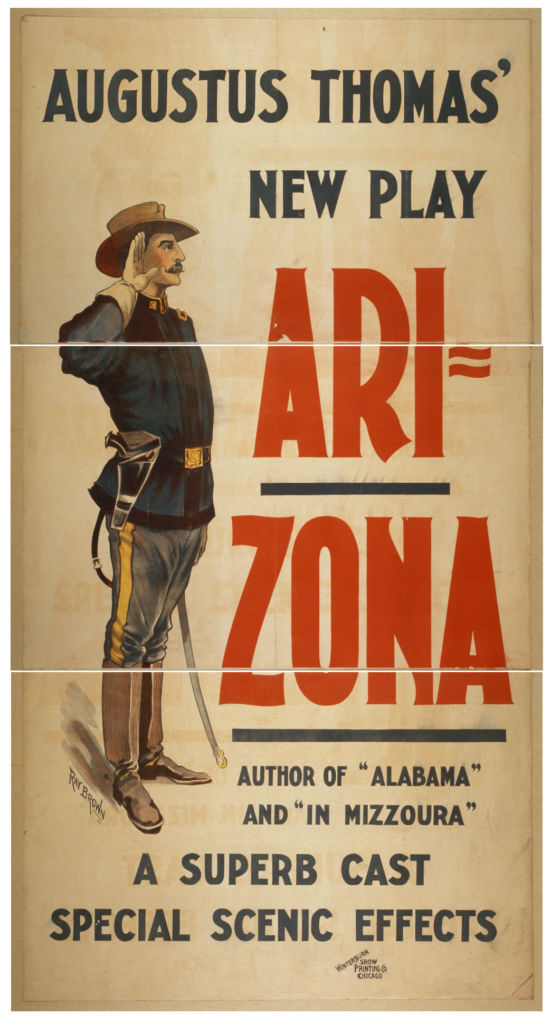 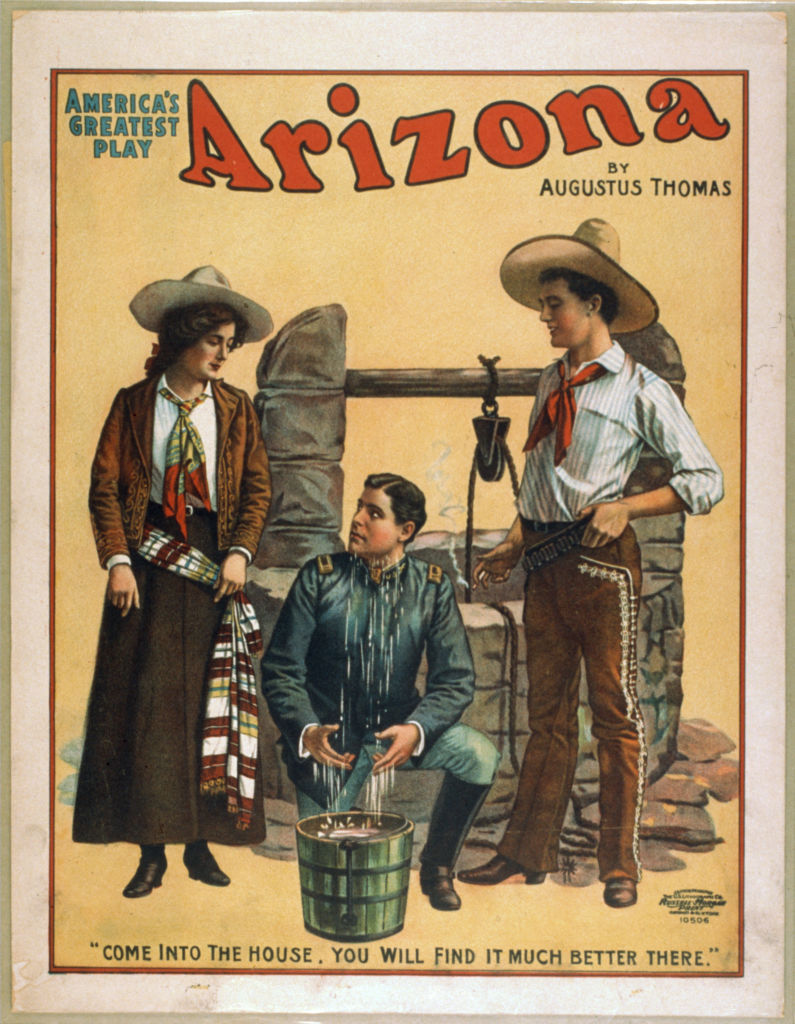 Remington may have further assisted in the play’s success. In two articles describing Arizona’s 1899 premiere at Hamlin’s Grand Opera House in Chicago, the New York Times stated that Remington, “an undisputed authority on both soldiers and cowboys,” had participated in the stage production’s scenery and costumes. Arizona went on to captivate audiences on Broadway and throughout the country (in 1913, a film version was released), while reinvigorating dramas about the frontier. Remington himself became involved in the theater when a dramatization of his novel John Ermine of the Yellowstone opened in New York in 1903. Unfortunately, his play failed to duplicate the success of Thomas’s Arizona.

While Remington’s prompting helped to further Thomas’s career, the playwright, in turn, affected the artist’s work. It was Gus Thomas who first alerted Remington, by telephone,  of the sinking of the battleship Maine in Havana harbor in 1898. After commanding Thomas to “ring off,” Remington immediately contacted his New York publishers; his cover illustration of recruits—“A First Lesson in the Art of War”—appeared more than three weeks before the United States officially declared war with Spain.

Thomas is also credited with piquing Remington’s interest in trying his hand at sculpture, when he told the artist: “Frederic, you’re not an illustrator so much as you’re a sculptor. You don’t see your figures on one side of them. Your mind goes all around them.” Later, Gus Thomas recognized Remington’s attraction to landscape painting. He remarked that in his Sunday morning and weekday evening “tramps” with the artist that he discerned how the tints of nature increasingly appealed to Remington’s evolving aesthetic sensibility. The playwright supported Remington’s new direction in painting outdoors; in his October 31, 1908 diary entry, Remington recorded: “Gus says my landscapes are as good as anyone paints. Says I will be a great landscapist. One will always believe nice things of himself.” The impressionistic landscapes featured in Another Frontier: Frederic Remington’s East confirm Gus Thomas’s assessment of his close friend’s work. 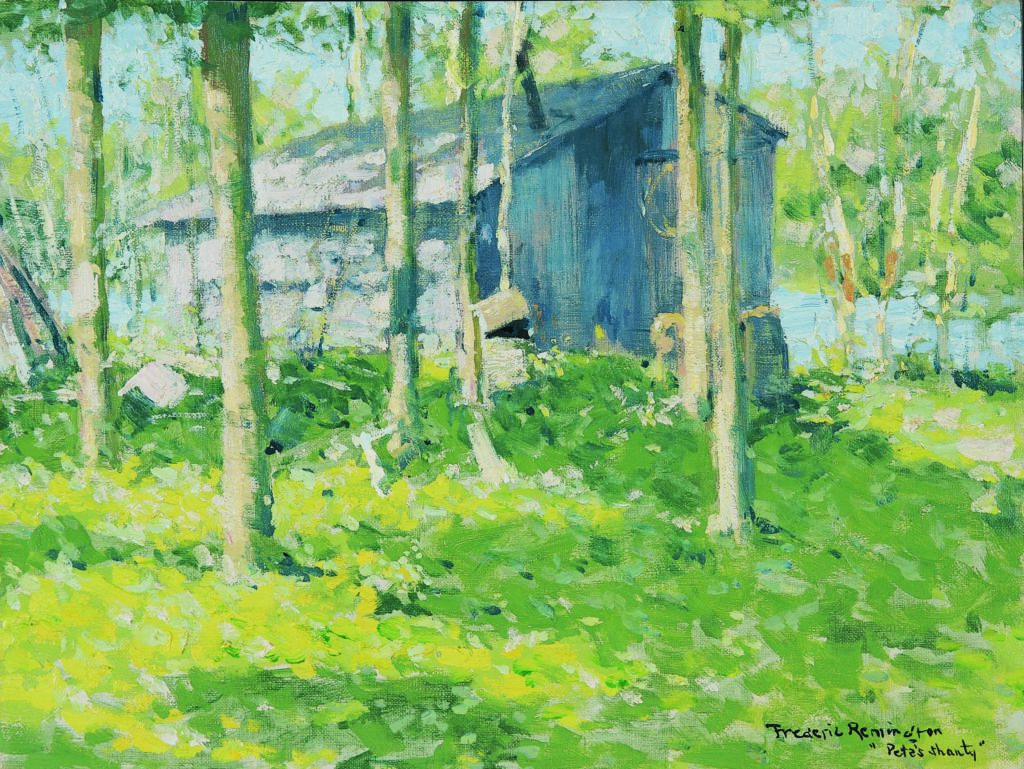 Augustus Thomas was one of the few people able to attend the artist’s funeral services (many could not because of blizzard conditions) and he was one of twelve subscribers who funded the presentation of Frederic Remington’s painting On the Southern Plains to the Metropolitan Museum of Art in 1911, which hangs prominently in the museum today. 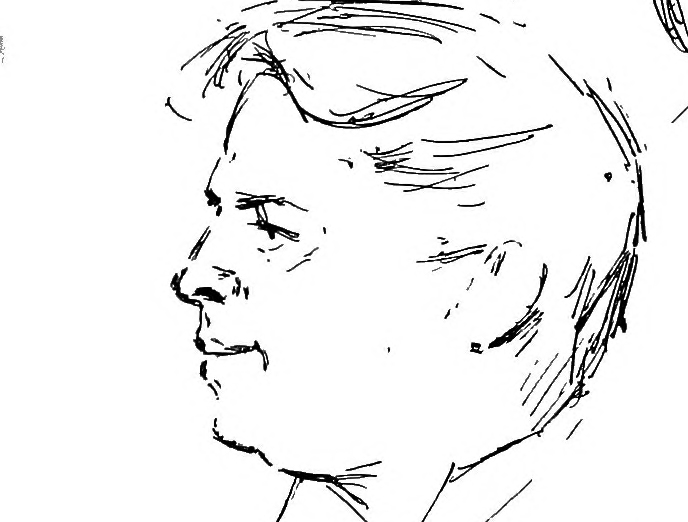 For an enjoyable, anecdotal account of this playwright’s friendship with the artist, see Augustus Thomas, “Recollections of Frederic Remington,” Century Illustrated Magazine 86, no. 2 (July, 1913): 354-61. 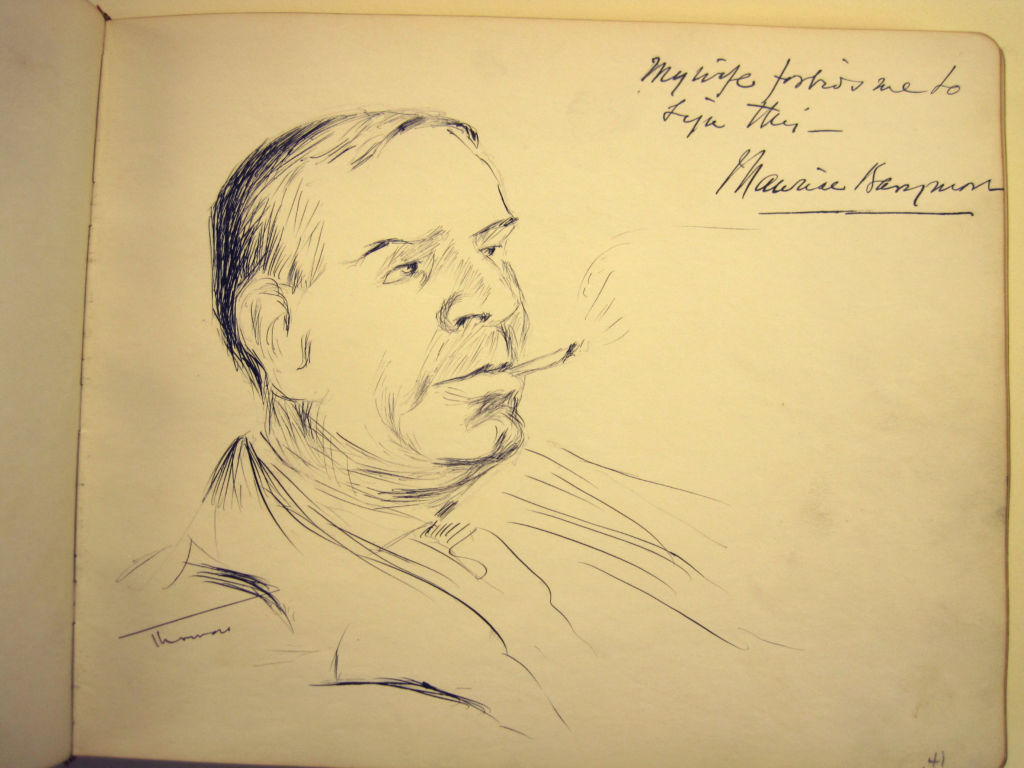 Gus Thomas sketch of Maurice Barrymore (“My wife forbids me to sign this—”), c. 1895 He was the patriarch of Barrymore acting family, and had acted in plays written by Thomas.