George Catlin (1796–1872), America’s most influential 19th-century Indian painter, born in Pennsylvania the fifth of fourteen children, was, first and foremost, a dreamer, with vast ambition and great expectations.  Trained in the law, he chose art instead and hoped to secure his fame and fortune by a decision he made early in his career: he would create a collection of paintings of America’s native peoples, done in their own country, consisting of portraits, landscapes, and scenes of everyday life, encompassing the tribes he encountered on a series of excursions in the West. The fullest version of his dream would be a comprehensive Indian Gallery showing every tribe living west of the Mississippi River. A scaled-down version represented what he actually achieved on miscellaneous jaunts and four summer excursions, in 1832, 1834, 1835, and 1836, up the Missouri River from St. Louis to its confluence with the Yellowstone; then down to the Southern Plains, and the border of what in 1836 would become the Republic of Texas; then twice up the Mississippi River to see, on his final trip, the red pipestone quarry on the Coteau des Prairies, which was considered a sacred site for the Western tribes.

Catlin began exhibiting his Indian Gallery in 1833 while it was still in rudimentary form. His claim on the public’s attention was his conviction that Indian cultures were vanishing and would be known by future generations only through the visual record he was preserving. Eventually Catlin’s Indian Gallery grew to more than 500 paintings — a great national work, deserving government patronage, he thought. But when an extended exhibition in Washington in 1838 failed to persuade Congress, Catlin at the end of 1839 left America to find a new audience and new prospects abroad. He would not return until 1871.

By then Catlin had enjoyed considerable celebrity status as artist, showman, and author — his classic account of his travels in the West, “Letters and Notes on the Manners, Customs, and Conditions of the North American Indians,” was published in 1841 — and his Indian Gallery had been viewed by the Queen of England and the King of France before his fortunes crumbled and his Indian Gallery was lost to creditors in 1852.

Subsequently, Catlin entered a period of relative obscurity, during which he subsisted off the sale of copies made from his original Indian Gallery paintings and new subjects added in the 1850s on three mysterious journeys (we have only his word to go on) to South America and up the Northwest Coast to Alaska. By combining old and new, Catlin created a second Indian Gallery which he called “cartoons,” or oil paintings on pasteboard panels, which he first exhibited in Brussels in 1870 then took to America for exhibitions in New York and Washington. Half of the 600 cartoons in his second Indian Gallery revisited paintings from the first Indian Gallery, done in the 1830s, transforming individual portraits into group portraits. With its expanded coverage the Cartoon Collection offered Catlin a second take, closer to his dream of creating a comprehensive visual record of native life in the Americas.

This exhibition of seventeen Indian cartoons had two goals: to illuminate the guiding principles behind Catlin’s entire enterprise, and to focus on Southern Plains subjects with a Texas twist. In a letter in the newspapers in 1834 announcing his impending departure for Comanche country, Catlin teased his readers: “You are no doubt inquiring, who are these Pawnees, Camanchees, and Arapahoes, and why not tell us about them?” He did, as this exhibition proved. Miraculously, despite Catlin’s personal ups and downs, both of his Indian collections survive largely intact in Washington. The original Indian Gallery is housed in the Smithsonian American Art Museum and the bulk of the Cartoon Collection in the National Gallery of Art, whose generosity has made Take Two: George Catlin Revisits the West possible. 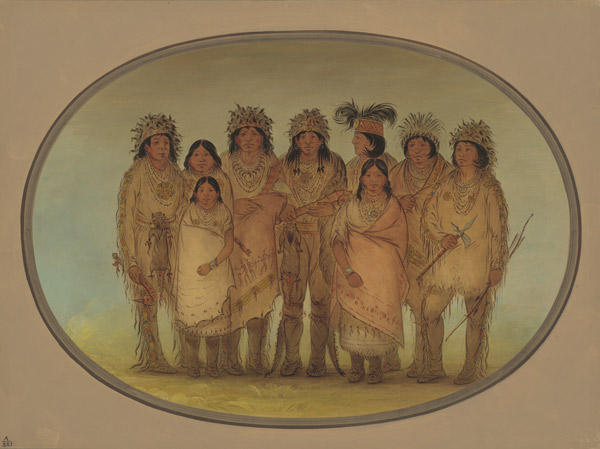 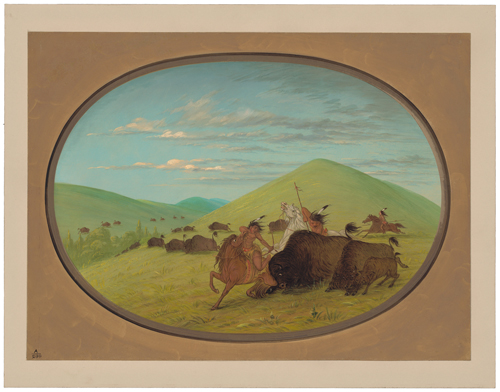