Bringing to life unforgettable characters and recalling significant events have always been fundamental tasks that the artistic imagination has addressed. In Remington & Russell, Retold, native peoples, explorers, mountain men, buffalo hunters, and soldiers were participants in such events as the Lewis and Clark Expedition, the Oregon Trail, and the Indian Wars, presenting a narrative of the 19th-century American West via 38 paintings by the preeminent storytellers of the American West, Frederic Remington (1861–1909) and Charles Russell (1864–1926). Unfolding largely in chronological order of the year the artworks were completed, the paintings in Remington & Russell, Retold spanned 22 years of Remington’s career (from age 25 until his death at age 48) and 37 years of Russell’s career (ages 21–58), bridging a combined period of the artists’ lives from 1885–1922.

When works by these two contemporaries were presented “shoulder to shoulder,” it is inevitable to reflect on the similarities and differences in their backgrounds, subject matter, points of view, styles, and techniques. Remington and Russell certainly were compared during their lifetimes by the public and the press, and they still are being compared today.

Remington was born in Canton, New York, and Russell in St. Louis, Missouri. Both were born to prosperous families who encouraged their talents, and both grew up in the post-Civil War era. With the exception of Remington’s attendance for 1 ½ years as an art student at Yale University, both were largely self-taught. Interests in subjects that engaged them over their artistic careers emerged when both were young boys. Before having stepped foot in Montana, Russell had filled his boyhood sketchbook with drawings of Indians, hunters, prospectors, traders, and gamblers. In 1887, while Remington was a student at Highland Military Academy, he wrote to another young man, asking to trade pictures. He said, “Draw me a good picture, only one, and I will be your slave forever. Give us battle between…Indians and soldiers…. Don’t send me…women or dudes. Send me Indians, cowboys, villans [sic] or toughs. These are what I want….”

In search of the frontier that was populated with such characters, Russell, at the age of 16, traveled to Montana in 1880; Remington headed for Montana one year later. Russell chose to stay in Montana, and while Remington did not, he continued to make trips to the West, and abroad, always returning to the East coast throughout his career. Both were present at a transformative period of the West, the 1880s and 1890s. After making Montana his home, Russell worked to support himself as an assistant to Jake Hoover, a hunter and mountain man, and following that, as a night herder. By 1900, he was painting full-time and had gained a reputation as the “cowboy artist.” In 1883, Remington began working with Harper’s Weekly. He covered the U.S. Cavalry from 1885 to 1888 and within a few years had become one of the most prolific artist correspondents of the day.

Remington took interest in soldiers and military themes — no doubt due to the influence of his father, an officer during the Civil War — and he and Russell chose cowboys and native peoples for their common subjects. Both were writers, illustrators, painters, and sculptors, each producing in excess of 3,000 works of art in his lifetime. Remington enjoyed a national reputation, while Russell had a loyal regional following. For both men, portraying the vitality, drama, and romance of the vanishing Western frontier was important, as evidenced in these quotes:

“The west that…I knew is plowed under – My pictures are history and I hope people will always like to read them.”
Charles M. Russell

“The West is no longer the West of picturesque and stirring events. Romance and adventure have been beaten down in the rush of civilization.”
Frederic Remington

Though they are joined in the public’s mind as being responsible for creating America’s vision of the Western frontier, theirs was not a singular vision. Russell’s interpretation of the conflict between American settlers and native peoples favors the Indian perspective, while early works by Remington regard the Indian as savage. Even their approaches to portraying the narrative are different:

“My pictures would drive the impressionist into hysterics but we must never lose sight of the fact that regular folks still like storytelling pictures.”
Charles M. Russell

“Big art is a process of elimination. Cut down and out…What you want to do is to just create the thought – materialize the spirit of a thing…then your audience discovers the thing you held back….”
Frederic Remington

While there is no documentation that the two artists ever met, it is certain they were aware of each other’s work. As recalled by his nephew, Austin Russell, Charlie Russell once said, “I bet that years from now when some art critic compares our pictures…what he’ll notice is that Russell and Remington saw the same country but not the same colors, and that’s all a difference of light.”

Early, mid-career, and mature works of both artists were included in Remington & Russell, Retold. Of note is Western Scene, one of Russell’s first commissioned paintings, and four mid-career watercolors (each reproduced in its day in either magazines, calendars, or commercial products), among them the 1908 First Wagon Tracks, last displayed in the Museum in 2005. In later works, Russell stayed true to themes he approached at a young age, and he reuses subjects and successful arrangements of figures, but with more depth and intense colors. Remington’s early days as an artist correspondent are represented in two 1886 watercolor field sketches of Buffalo Soldiers, The Ambushed Picket and The Riderless Horse. His career development as an illustrator was demonstrated in three grisailles (black-and-white oils) from 1891 to 1901, which were juxtaposed with 10 works from the last five years of his life — five dazzling sun-struck paintings and five nocturnes — representing his late career when he had abandoned his concern with detail and pared his compositions down.

This reconsidered pictorial survey of the exploration of the American West was as revealing about the collector as it is of the two artists who created these works. When one considers that all but four of the paintings on display (The Dry Camp, Among the Led Horses, The Love Call, and The Apaches!) were acquired by Sid Richardson, a successful oil wildcatter, it would appear that he felt a kinship with the risk-takers who won the untamed West, but not the pioneers who settled it. Save for the occupants of the little town of Utica [A Quiet Day in Utica], there is not a painting of a homesteader family or a prairie home to be found.

Still, these are stories we like to “read” today. 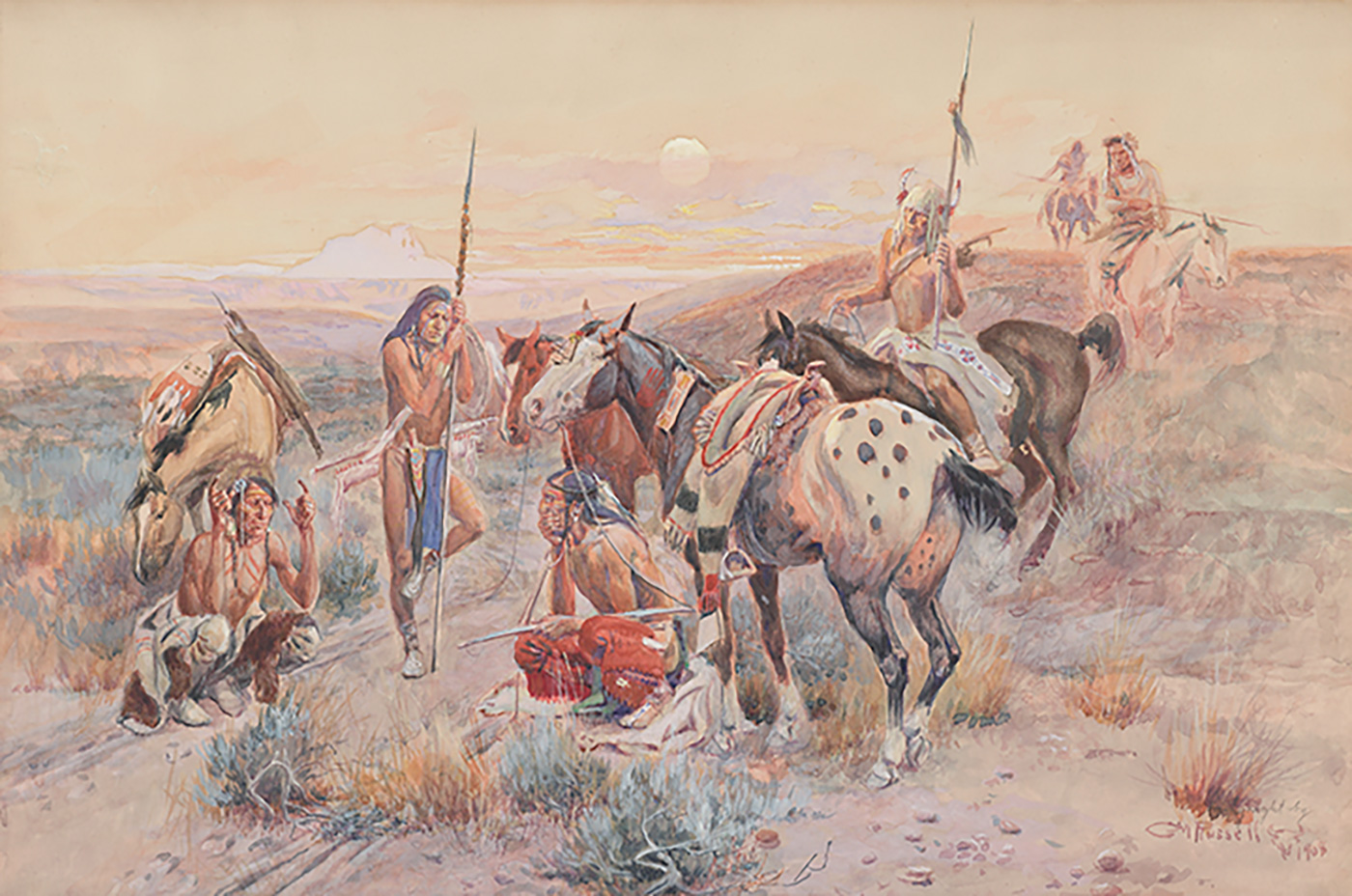 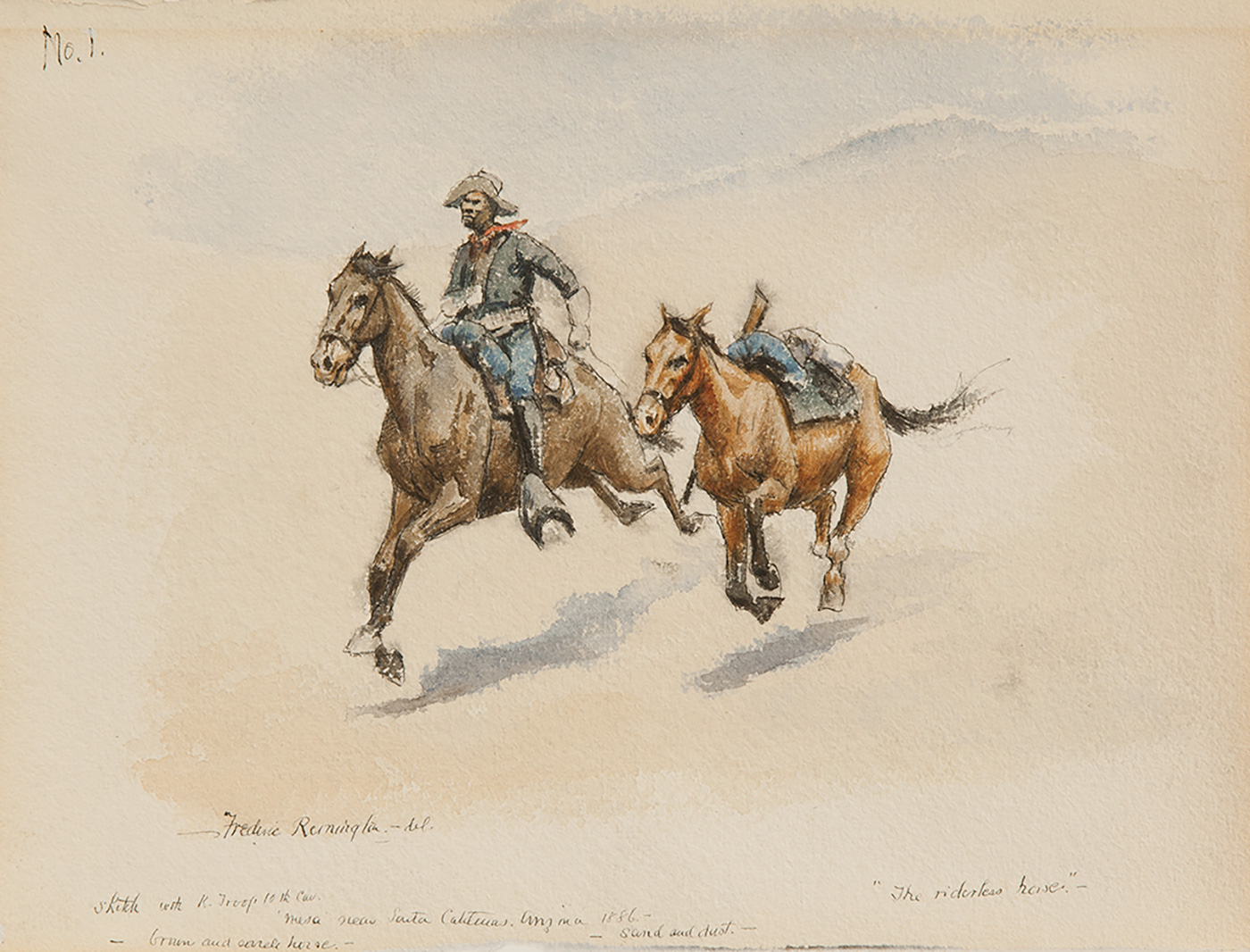