It is appropriate that Fort Worth, Texas, whose motto is “Where the West Begins,” would be the site of “The Lonesome Dove Trail,” a January-through-June celebration of Larry McMurtry’s Pulitzer Prize-winning novel Lonesome Dove (1985) and the subsequent popular television miniseries based upon it (1989). Citywide events included art exhibitions, screenings, seminars, and a reunion of the miniseries’ cast members, including Robert Duvall, Tommy Lee Jones, Diane Lane, and Angelica Huston. The inaugural festivities commenced at the Sid Richardson Museum, which was dubbed the Lonesome Dove Trailhead, with the exhibition Lonesome Dove: The Art of Story.

The museum, which opened in 1982 and is named for oilman and philanthropist Sid W. Richardson (1891–1959), houses his collection of Western art, which consists primarily of works by Frederic Remington (1861–1909) and Charles M. Russell (1864–1926), but also includes art by Charles Schreyvogel (1861–1912), Oscar E. Berninghaus (1874–1952), and Frank Tenney Johnson (1874–1939), among others. Occupying a site in Sundance Square, a downtown area of historic buildings, the Sid Richardson Museum offers exhibitions of artworks that reflect the “romance and reality” of the American West.

Lonesome Dove: The Art of Story was a unique, ambitious undertaking for this museum. As Mary Burke, director of the Sid Richardson Museum, notes:

“Our presentation of the West — through well-crafted words, video, set illustrations, costume designs, storyboards, and work by Remington and Russell — is a first-of-its-kind exhibition for our museum, and it sets the stage for the entire citywide celebration.”

The intermingling of these diverse objects in the galleries conveyed a sense of how narratives — visual and textual — have been constructed through a melding of fact and fiction.

Entering the exhibition, the visitor was flanked by quintessential paintings by Russell and Remington from the Richardson Museum’s collection. This space also signaled the exhibition’s multimedia aspect by a centrally-placed vitrine displaying three books: The Texas Stock Directory; or, Book of Marks and Brands by W. H. Jackson and S.A. Long (1865); Joseph McCoy’s Historic Sketches of the Cattle Trade of the West and Southwest (1874); and the 1886 A Texas Cowboy; Or Fifteen Years on the Hurricane Deck of a Spanish Pony by Charles A. Siringo. Each of these volumes contained visual images and all are historically significant. Jackson and Long’s book was a very early book from the cowboy era. McCoy was regarded as the founder of the cattle industry in Kansas and originator of the Abilene Trail. On the title page of his book, he identified himself as “The Pioneer Western Cattle Shipper.” Siringo’s book gained fame as the first cowboy autobiography.

Moving further into this gallery, the visitor encountered two other remarkable books of the cowboy era. The National Cowboy and Western Heritage Museum in Oklahoma lent to the exhibition Jack Bailey’s 1868 day-by-day journal of a cattle drive from Texas to Kansas. From the Rees-Jones Collection, in Dallas, came the wonderfully titled 1881 volume, The Beef Bonanza; Or, How to Get Rich on the Plains. This book, authored by General James S. Brisbin, helped incite the cattle boom of the 1880s.

Also displayed in this space are annotated pages from Larry McMurtry’s first draft of Lonesome Dove, as well as a copy of the published novel annotated by Bill Wittliff, who was the television series’ co-executive producer and screenwriter. Pages of his screenplay’s first draft, a nearby trail map, set illustrations, storyboards, and other production materials for the miniseries displayed here and elsewhere in the exhibition were from the Lonesome Dove Collection in the Wittliff Collections at Texas State University, San Marcos. These archives were presented here for the first time in an art museum exhibition.

The inclusion of set and costume designs and storyboards for the Lonesome Dove miniseries reinforced viewers’ awareness of how intricately constructed and calculated filmic productions are. They also reminded us that, likewise, paintings by Remington and Russell did not appear spontaneously, but were based on experiences, sketches, research, and, particularly in Remington’s case, photographs. The exhibition also offered visitors opportunities to consider associations between works by Remington and Russell and the miniseries’ production materials. For example, a gallery wall text drew attention (as does an accompanying storyboard) to Remington’s The Misdeal (ca.1897, Private Collection) being choreographed not unlike a single shot in a film (more appropriately, we might say that the film shot is choreographed to resemble the painting). The resemblance to and, at times, the dependence of the Lonesome Dove miniseries’ staging, sets, and costumes on the compositions of Frederic Remington and Charles M. Russell was one of the fascinating aspects of this exhibition. The welcoming installation encouraged visitors to notice similarities and identify affinities. This was especially true in the exhibition’s central gallery.

Here the Lonesome Dove materials occupied the middle area and were surrounded by six Russell paintings and six Remingtons. The Charlie Russell compositions include depictions of cowboys when away from the herd, such as Cowboy Sport—Roping a Wolf (1890, Sid Richardson Museum), painted when Russell was still a working cowboy. Rowdy cowboys in a small Montana town are detailed in Utica [A Quiet Day in Utica] (1907, Sid Richardson Museum), where Russell included himself as a bystander watching the mayhem. On the wall opposite the Russell artworks was a stunning installation of four of Remington’s larger, more epic paintings — The Fall of the Cowboy (1895, Amon Carter Museum of American Art), Fight for the Waterhole (1903, Museum of Fine Arts, Houston), Buffalo Runners—Big Horn Basin (1909, Sid Richardson Museum), and The Stampede (1908, Gilcrease Museum, Tulsa). Adjacent to the latter painting was a video screen showing the stampede scene from the Lonesome Dove miniseries. The eerie, sublime lighting of Remington’s painted rendering connected it to, and perhaps influenced, the St. Elmo’s fire affect seen in the televised depiction. The wall text above the screen read: “Had the devil last night in shape of a storm….Keen loud claps of thunder and the most vivid, forked, scariest pretiest & fastest lightning I ever saw.” Jack Bailey, 1868

The trials and tribulations endured by the cowboys of Larry McMurtry’s novel and portrayed in the miniseries find their counterparts in several paintings in the exhibition, but the most poignant of these is Frederic Remington’s The Fall of the Cowboy. Painted in 1895, the painting illustrated a story that the artist had asked Owen Wister (who later, in 1902, authored the novel The Virginian) to write about the evolution and passing of the cowboy. Wister’s article, appearing in the September 1895 issue of Harper’s Monthly, attributed the cowboy’s demise to

“the exhausting of the virgin pastures, the coming of the wire fence, and Mr. Armour of Chicago, who set the price of beef to suit himself.”

Remington’s somber wintry scene, with its cold, steely sky, offered an affecting visual elegy to a cowboy era that had lasted only thirty years. This painting not only related to Lonesome Dove, but also served as the cover art for McMurtry’s 2014 novel The Last Kind Words Saloon.

The last painting the visitor was likely to view before exiting the exhibition was Frederic Remington’s self-portrait, Self-Portrait on a Horse (ca.1890, Sid Richardson Museum). It was a fitting image to pause in front of and think about its ties to Lonesome Dove: The Art of Story. Setting himself and his mount in the center of the composition, the artist adopted the guise of a cowboy, the character who occupied the central place in Remington’s vision of the American West. Not unlike the actors in the Lonesome Dove miniseries, Remington fashioned a persona in his painting that asserts the authenticity of his visual narratives of the West.

Self-Portrait on a Horse also neatly tied together Lonesome Dove: The Art of Story, by circling back to one of the first images seen in the exhibition, the illustrated cover of Siringo’s A Texas Cowboy; Or Fifteen Years on the Hurricane Deck of a Spanish Pony. This image anticipated Remington’s picture by rendering a close-up view of a lone, mounted cowboy gazing at us. Charles A. Siringo’s cover illustration, Frederic Remington’s and Charles M. Russell’s paintings, Larry McMurtry’s novel, and Bill Wittliff’s screenplay all focused their art on the cowboy, and each constructed its own story of that fabled Western figure. 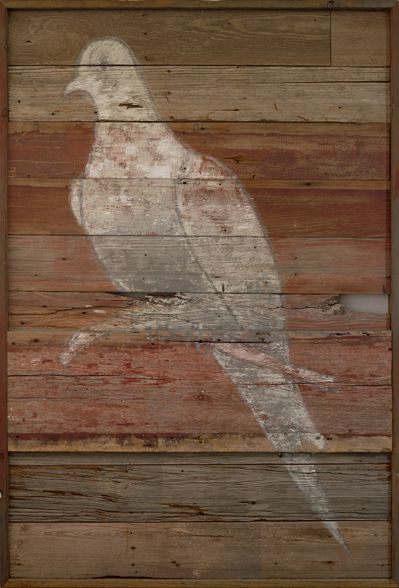 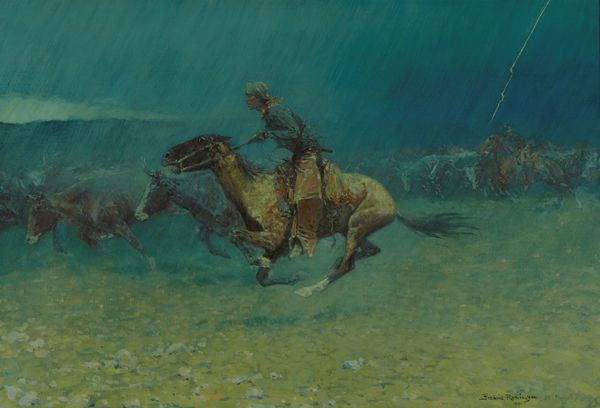 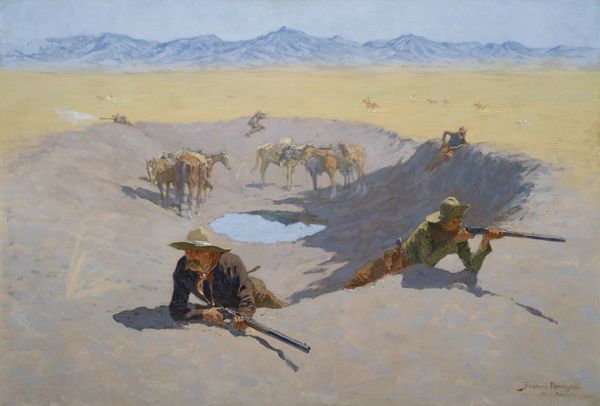