How do scholars discern the fakes and forgeries from Remington’s authentic works and reworked compositions? The current system relies on a three-tier approach of connoisseurship (an expert verifying that the work reflects the artist’s style and technique), provenance (the history of an artwork’s ownership), and scientific analysis. For example, He Rushed the Pony Right to the Barricade (ca.1900) is a black-and-white oil painting that was published in Remington’s novel, The Way of an Indian. Much later, someone other than the artist painted over the canvas with color. Through a combined effort of connoisseurship and science, the overpainting was discovered. Remington scholar Peter Hassrick thought the color palette and brushwork of He Rushed the Pony Right to the Barricade did not appear to be Remington’s, yet areas such as the signature, which appears to be painted around, looked original. The Sid Richardson Museum sent a small cross-section of the painting to a research laboratory, whose examination revealed two layers of paint separated by a layer of dirt — indicating that several years had elapsed between the applications. Further analysis of the colored layer determined that this paint was not produced until about 22 years after Remington’s death, confirming that the alteration was made by someone other than the artist. Today, viewers can see part of the painting’s original layer after a section of the color painting was removed. The altered painting is displayed in the gallery with an edition of the book in which the original illustration appears.

Other artworks displayed in Frederic Remington: Altered States went through a similar process in order to determine the truth about the work’s authenticity. Is it real or is it a fake? Opportunities for comparison included Remington’s painting The Thunder-Fighters Would Take Their Bows and Arrows, Their Guns, Their Magic Drum. Originally produced to illustrate the 1892 edition of Francis Parkman’s book The Oregon Trail: Sketches of Prairie and Rocky-Mountain Life, the painting that was on exhibit had a different number of figures than that of the illustration. A displayed edition of Parkman’s The Oregon Trail allowed visitors to see how Remington reworked the composition in order to remarket his painting. The Way Post, (ca.1881), a watercolor and gouache on paper, was signed with initials using a signature style Frederic Remington used occasionally as a young artist. However, conservation studies suggest that the signature initials were applied at a later date, possibly by someone else.

In addition to the three paintings, visitors could examine two different castings of Remington’s bronze The Rattlesnake. With a preference for refining his work, Remington often modified his bronze casts, and in the case of The Rattlesnake, after eleven castings of the smaller model were produced, Remington significantly altered and enlarged the sculpture. 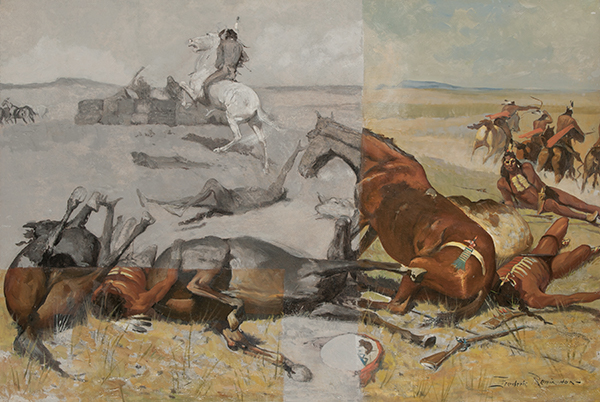 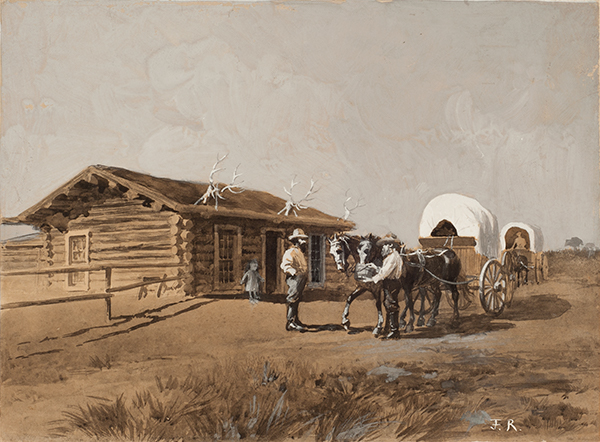