When Blackfeet and Sioux Meet 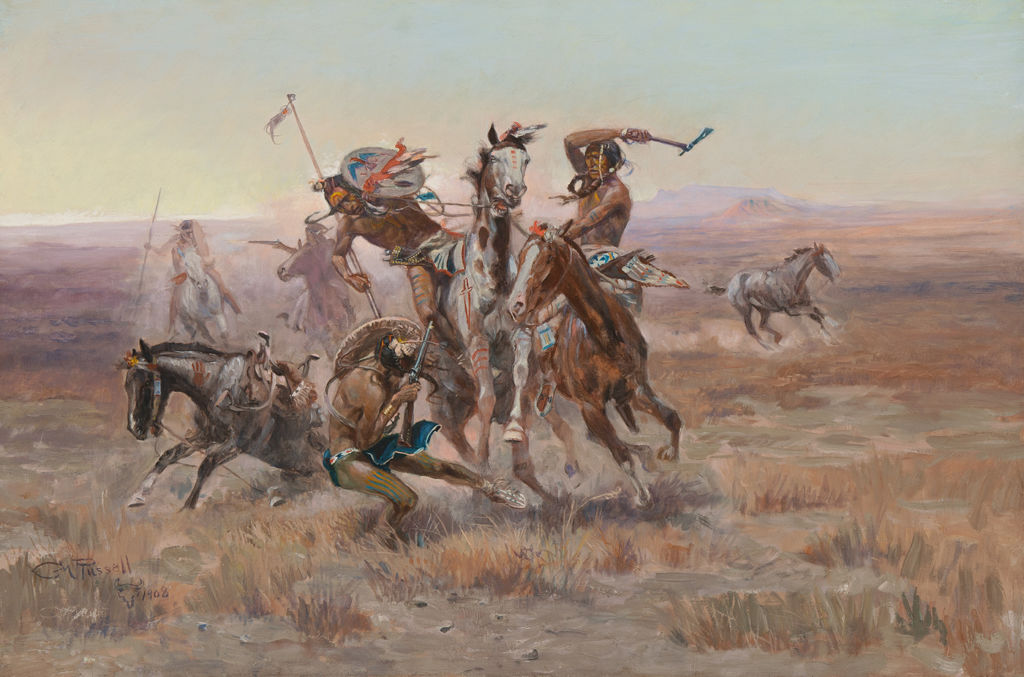 When Blackfeet and Sioux Meet

A moment of intertribal fighting involving three individuals from two tribes on the plains tells a story of war at close quarters. The outcome is uncertain as a Sioux Nations warrior, tomahawk upraised, attempts to intercede on behalf of his dismounted ally who has avoided the charging member of the Blackfoot Nation. Shield raised to ward off the thrusting lance, the downed warrior has a chance to fire into his enemy’s unprotected midriff. For the Blackfoot this is a moment of grand heroism. He has already earned a coup for striking an armed enemy with his lance and, should he ride away safely, will receive high acclaim for his deed. The wounded pony falling on its haunches is an essential ingredient in this tale of war. The red handprint painted on its neck may indicate that the dismounted warrior, now fighting for his life, has himself killed an enemy in hand-to-hand combat. Now the tables have turned and he is calling upon all of his martial prowess to avoid the same fate.

The coup system centered on the high regard Plains Indian societies held for those who distinguished themselves by their courage. Coups granted can be considered equivalent to the medals awarded to soldiers today for distinguished service on the battlefield. Coups might be earned by killing an adversary in close quarters combat, touching an adversary, and in some coup systems scalping a fallen foe. In other systems, including the Sioux, coups were awarded for being wounded in battle, with wounds received at close quarters counting highest.