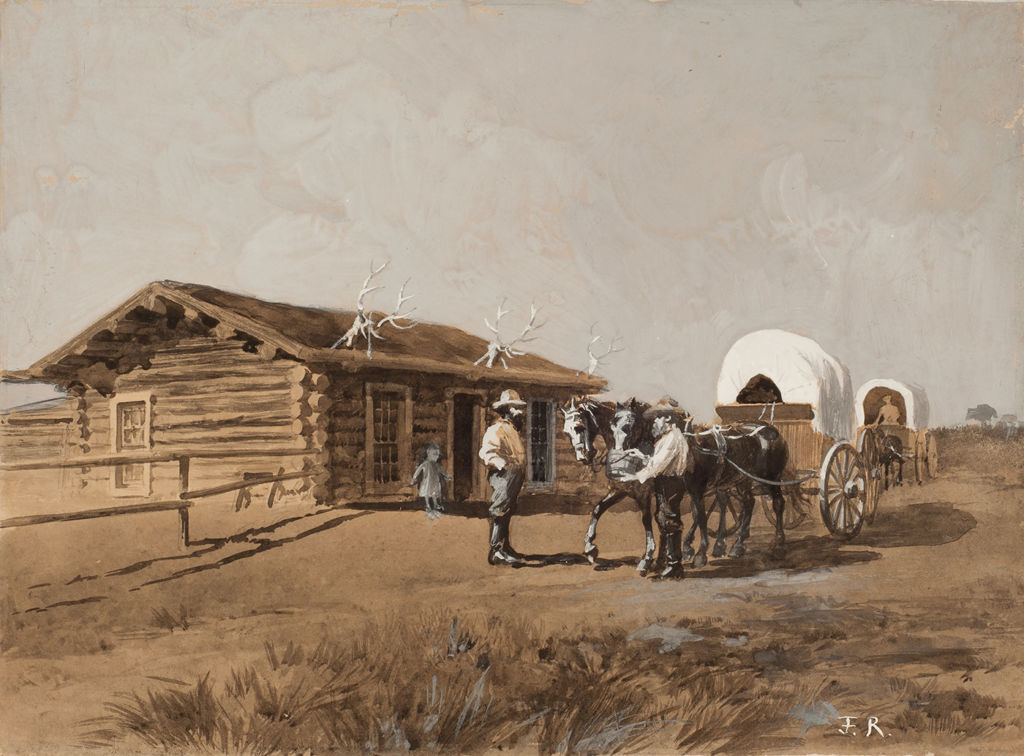 A simple watercolor study of a pioneer resting his horses at what appears to be a stage stop, The Way Post may be a product of Remington’s brief stay in Montana on his first trip to the West in 1881. It has the documentary ring of his earliest western scenes, and the signature, F.R., is one he used around 1881 but rarely thereafter. However, because the painting’s style is so unformed, and its provenance incomplete, it cannot be dated or attributed to Remington with certainty. Remington scholar R.W.G. Vail noted as early as 1929 that there were probably more forgeries of Remington works than of any other American painter. A forgery occurs when someone takes an artist’s work, paints out his or her signature, and signs the forged signature of another artist.

The Way Post bears resemblance to the work of Western illustrator and sculptor, William de la Montagne Cary (1840-1922). Cary, like Remington, was born in New York, traveled to the West, and illustrated for magazines such as Harper’s Weekly and Leslie’s. The Gilcrease Museum (Tulsa, OK) houses a collection of Cary’s works, including a similar watercolor sketch of comparable size, The Strong Cup, which depicts a traveler on horseback, holding the reins to his packhorse, and taking a last drink at a trade post before resuming his travels.

Kimbell Art Museum conservation staff conducted studies of The Way Post. Infrared reflectography (a non-invasive method of looking through paint layers that are impenetrable to the human eye) did not reveal any pentimenti (artist’s changes) in the painting. However, examination of the painting under microscope revealed that the signature initials were painted with a bulkier, more granular white paint than the artist used for the highlights in the gouache. And, the initials appear quite raised from the surface and less integrated with the painting. These findings suggest that the signature was a later addition to the painting. Did Remington add his signature at a later date? Is The Way Post the work of another artist? These questions remain unanswered.