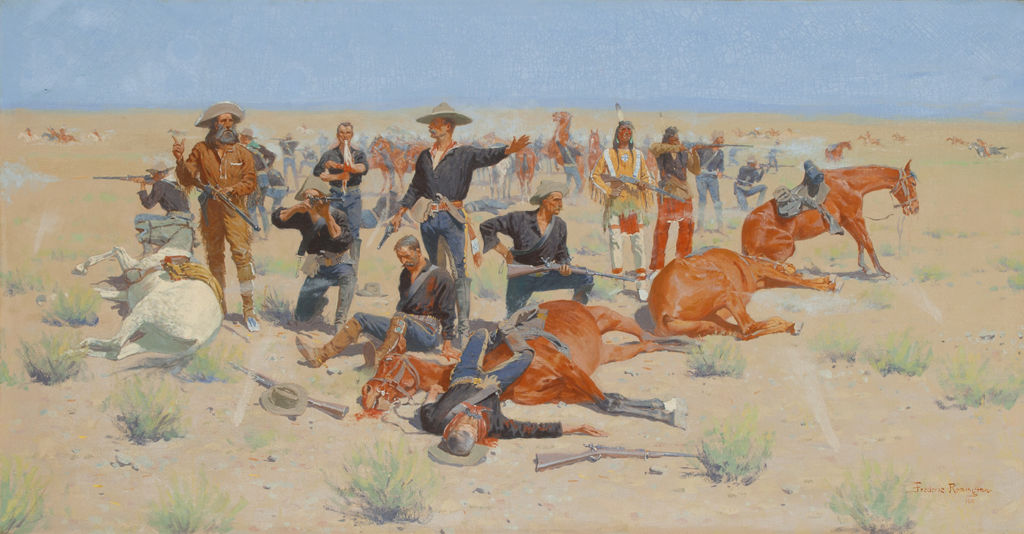 Remington frequently returned to a theme that represented his version of grace under pressure: a group of cowboys, mountain men, or soldiers surrounded by circling Indigenous Americans and confronting death without a hint of fear. Here in Rounded-Up is his ideal officer, standing erect directing the defense, eyes shaded, face an emotionless mask, unperturbed by the bullets whizzing by. He and the scout are conferring, most likely planning a determined show of force, which would lift the siege. The plain is flat, their enemy visible and their path of honor open. The vibrant hues and grating light have added poignancy to the scene—men battling for their lives on such a perfect day. Rounded-Up shows the realism for which Remington was known and admired. N. C. Wyeth, as a young illustrator aspiring to capture the “sublime and mysterious quality” of the West was initially appalled by Remington’s concentration on “the brutal and gory side of it.” But he soon modified his views. “Remington’s show was fine” he wrote in 1904. “It was vital and powerful although most of his pictures were too gruesome…Nevertheless the exhibition impresses you and convinces you that Remington had lived in that country and was telling something….”