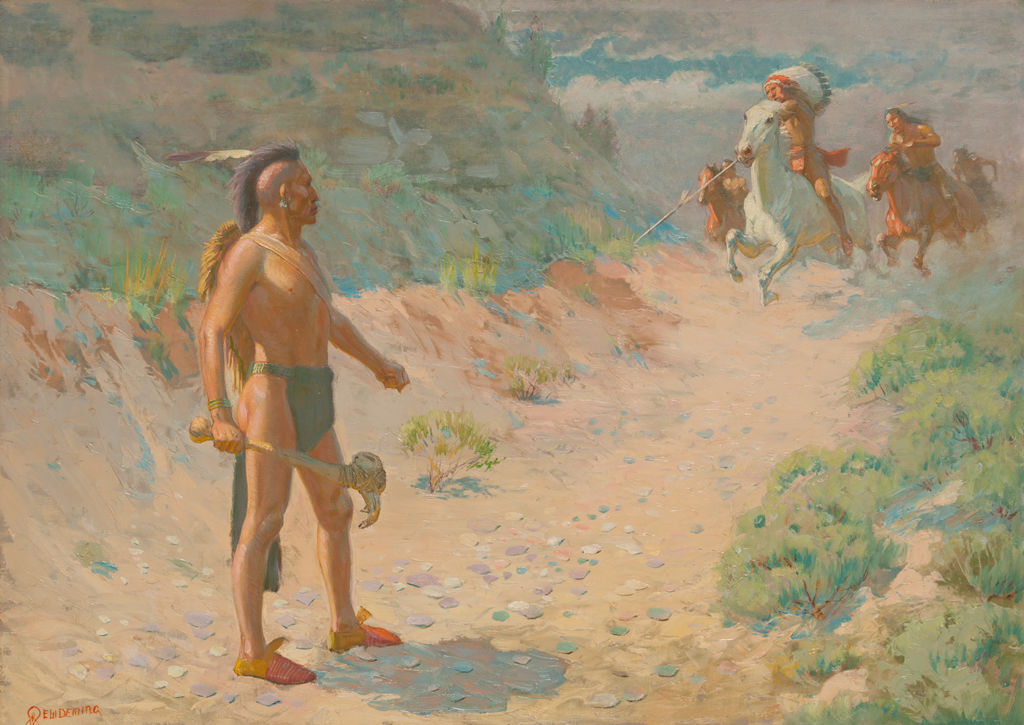 Edwin Deming enjoyed a long, productive career as an artist and illustrator. Deming traveled extensively among native cultures in the West in the late 1880s and through the 1890s. His first trip to the West was in 1887 when he visited the Apaches and the Pueblo peoples in the Southwest and the Umatillas in Oregon. He was best known as a muralist and received a letter from Frederic Remington in 1909 stating his intention to have Deming do a “panel or two” for the dining room of Remington’s new house in Connecticut. However, during the same period his smaller canvases were also winning recognition for his evocation of the spirituality of indigenous American life. Deming once quoted Remington as having said “Deming the difference between your Indians and mine is that I saw my Indians through the sights of a rifle and you saw yours from inside the blanket in his tipi.” Indians owes a sizable debt to Remington’s great oil Ridden Down (Amon Carter Museum of American Art, Fort Worth). The situations are identical. In Indians an indigenous man pursued by an enemy war party can run no further. Dismounted he braces for his last stand. Club in hand, imperturbable in the face of death, he is the model of the stoical warrior. Where Remington showed a meeting between hostile plains tribes Deming chose to underline the clash of different native cultures by giving his lone warrior the roach cut usually associated with the woodland tribes, though he could have been thinking of a Pawnee.