He Snaked Old Texas Pete Right Out of His Wicky-up, Gun and All 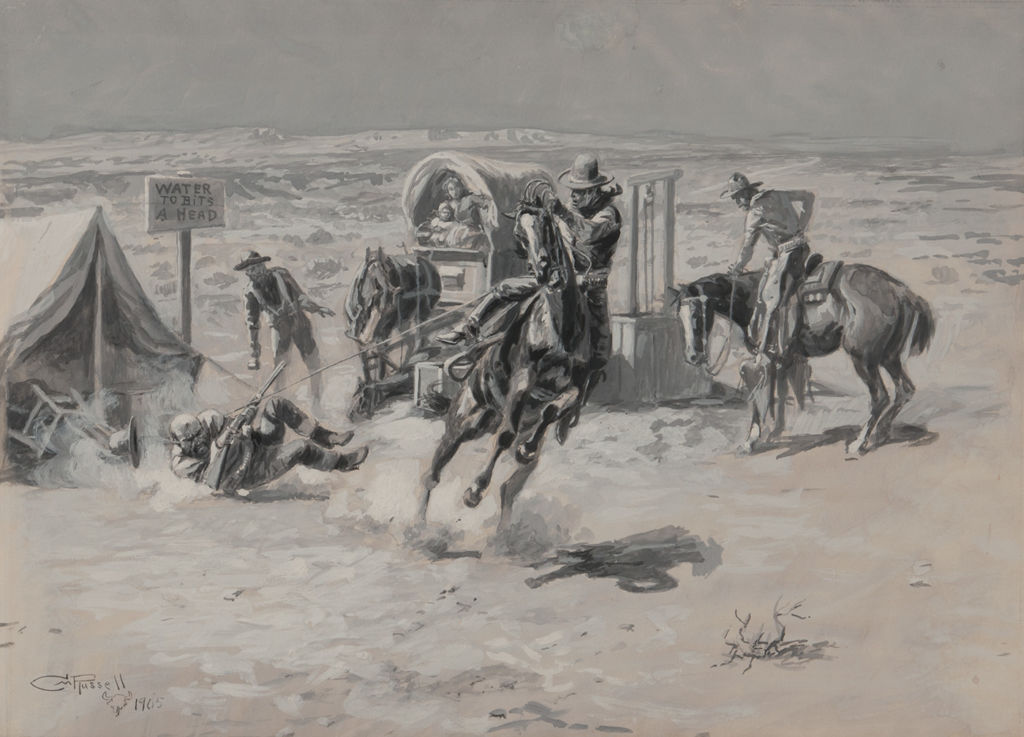 He Snaked Old Texas Pete Right Out of His Wicky-up, Gun and All

This was one of the pictures that Russell painted for McClure’s Magazine to illustrate the first two installments of Stewart Edward White’s “Arizona Nights”. It is faithful to White’s story about a tough named Texas Pete “about as broad as he was long” with “big whiskers and black eyebrows” who discovered a water-hole in the middle of the Arizona desert, set up shop, and began gouging the emigrant traffic en route to California “two bits a head-man or beast” for a drink of water. Texas Pete sat outside his canvas shack a Winchester across his lap, and let a crude sign speak for him. One day two good-hearted cowboys chanced by when an emigrant denied water because he could not meet the price bent down to scoop up a drink for his sick child from an overflow puddle. His thirsty horses chose the same moment to dip into the trough. Texas Pete nursing a hangover and in an uglier mood than ever jumped up and fired, killing one of the horses. Instantly a cowboy grabbed his rope and:

With one of the prettiest twenty-foot flip throws
I ever see done he snaked old Texas Pete right out
of his wicky-up gun and all. The old renegade
did his best to twist around for a shot at us; but it
was no go; and I never enjoyed hog-tying a critter
more in my life than I enjoyed hog-tying Texas Pete.