He Rushed The Pony Right to the Barricade 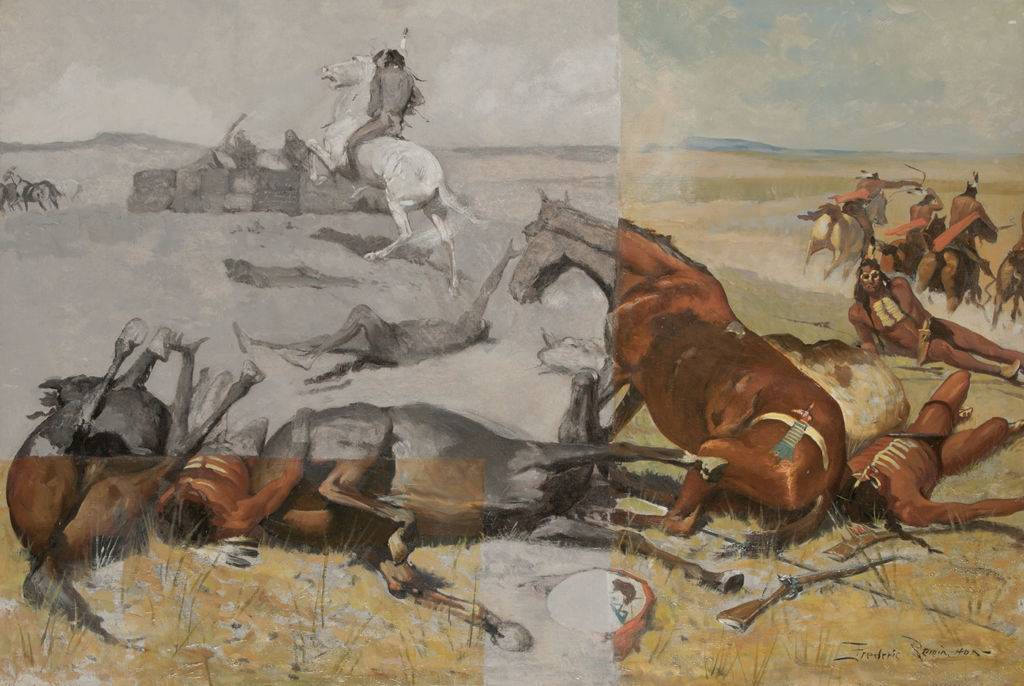 He Rushed The Pony Right to the Barricade

The popular demand for Frederic Remington’s paintings created a high market value, and some individuals were quick to realize that profits could be made through unscrupulous practices. Remington’s signatures were forged and original paintings were occasionally “enhanced” in an attempt to increase their market value. Such is the case of He Rushed the Pony Right to the Barricade. Around 1900 Remington painted a black-and-white oil on canvas which was published in his novel The Way of an Indian but much later someone painted over it with color. The overpainting was discovered through a combined effort of connoisseurship and science.

Remington scholar Peter Hassrick, author of the Remington catalogue raisonnè, thought the color palette and brushwork of He Rushed the Pony Right to the Barricade did not appear to be Remington’s, but yet, areas such as the signature, which appeared to be painted around, looked original. A raisonnè is a comprehensive annotated listing of all known artworks by an artist in a particular medium. The author(s) decide which works to include and make assessments as to whether a work is authentic and where it fits within the artist’s body of work. Most raisonnè include a brief description of each work, an illustration, dimensions, the medium, date the object was created, ownership history (provenance), and exhibition and bibliographic history.

A small cross-section of the painting was sent by the Sid Richardson Museum to the Winterthur Scientific Research and Analysis Laboratory. Their examination revealed two layers of paint separated by a layer of dirt—indicating that several years had elapsed between the applications. Further analysis of the colored layer determined that this paint was not produced until about 22 years after Remington’s death confirming that the alteration was made by someone other than the artist. A section of the color painting was then removed to reveal the original painting underneath which serves now as a demonstration of how original works of art can be compromised by those with fraudulent intentions.”